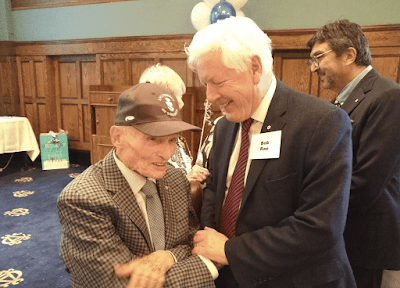 Bill Davis has died. Bob Rae knew him for a very long time. He writes:

Despite the two-decade gap in our ages, our friendship grew and strengthened over many years. When I was a student at the University of Toronto, I would head across Queen’s Park to sit in the gallery and watch debates in the Ontario legislature. John Robarts was premier and Bill Davis was “all things education” — he would later shepherd into law the University of Toronto Act, which was based on a report on university government that I had helped draft as a member of the Students’ Administrative Council. He claimed later to have remembered my sitting in the gallery of the legislature, which I have always thought unlikely. But I realized in those early days he was a consummate professional, and someone interested in change. “Reforming in order to preserve”.

Davis was a Progressive Conservative. The emphasis was on progressive. He gave Ontario its community college system. He gave our son -- who was born with a cleft lip and palate -- a program that covered 75% of his dental reconstructive costs, which were considerable.

But, above all else, he was a fundamentally decent man. Rae writes:

There were things we did that, he made clear, he disagreed with, but there were a number of measures of which he thoroughly approved. “Just don’t quote me, Robert”, he would chuckle on the phone, using that name more often than any other. With his own relationship with both Brian Mulroney and Jean Chretien, and his own experiences on the national unity file, he proved an invaluable counsellor on constitutional issues, and we spent many moments reflecting on what Ontario had to be prepared to do in order to bridge the many national divides that were becoming deeper and less easy to resolve.

And he was committed to his family:

Devoted husband, father, grandfather and great-grandfather, he doted on them all, as they came to dote on him. They put up with his corny jokes, his foibles, his asides, and his love of sports, because they knew none of these were as defining as his deep love of family, friends, decency, and country. He has touched us all with his kindness and example, and we can only repay that gift with living and loving as he did.

We have lost a great man.

Without Davis' support, it's unlikely that we'd have repatriated the constitution and have a Charter of Rights and Freedoms. Ah, the good old days, before party tribalism made cooperation impossible on anything important.

Davis was a bridge builder, Cap. These days, we burn bridges.

Growing up in Ontario, Bill Davis was the first politician I followed and admired. I almost wound up becoming a PC. Fortunately I didn't reach voting age until Pierre Trudeau arrived. That said, Davis was a fine man.

Davis could work with Trudeau and the other premiers, Mound. As Cap says, we would not have a Charter of Rights and a repatriated constitution if he had not been at the table.