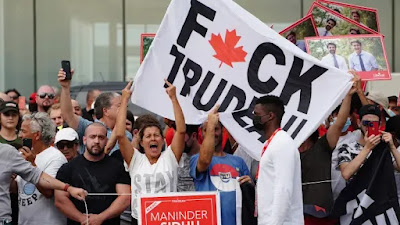 Since the election call the Liberal lead has melted. At week’s end, a handful of polls put Erin O’Toole’s Conservatives in first place.

But while the current national numbers bear a striking resemblance to the CPC/Liberal 2019 finish, there are major qualitative differences.

The Liberals are losing ground to both the Conservatives and the New Democrats in Ontario. That trend could lead to a disaster for his party on voting day.

Yesterday, Trudeau was greeted by an angry ground -- middle fingers in the air -- shouting that his talk of vaccine passports was segregation, pure and simple. I have written that we live in a time when Superstition has overthrown Reason. Hebert asks the crucial question: What are progressive voters to do?

[Trudeau] must hope that the prospect of a possible Conservative government will drive at least some of those who have been looking to support the NDP and the Bloc to reconsider.

Calls for progressive voters to coalesce behind the Liberals to keep the CPC at bay worked for Paul Martin in 2004 and for Trudeau in 2019. This year, both O’Toole and Singh have been trying out different strategies to counter the impact of such appeals.

The CPC leader has spent much of the first stretch of the campaign distancing his party from that of his predecessors. While it often seemed that Stephen Harper in 2015 and Scheer two years ago were mostly interested in fuelling the passions of the Conservative base, O’Toole has taken a different approach.

He has been highlighting policies that contrast with the Conservative platforms of the recent past.

The CPC plan is not just worker friendly; it casts the party as a union ally. It features employment insurance tweaks that one would usually expect to find in an NDP platform.

Where O’Toole’s predecessors approached all drug-related issues as law-and-order matters, he equates drug addiction with a health issue.

This week, O’Toole’s efforts to put a more positive spin on his party and its policies got an assist from the NDP.

On the campaign trail, Singh left the door open to supporting a minority Conservative government.

All this sounds a lot like Jack Layton opening the door for Stephen Harper.

Elections are about the best possible outcome -- not the best outcome.

A couple of weeks ago, with the Libs riding high in the polls, calling a snap election seemed like a no-brainer. Pundits were writing off the Con's low-budget Willie Wonka ad as a major gaffe, despite it going viral with millions of views.

Now, the Libs are sagging in the polls and cancelling campaign stops. They're the only major party that still hasn't released a policy platform. The minority government they once called toxic is looking real good.

O'Toole's move to the left caught everyone by surprise and is a big reason for Trudeau's predicament. The Cons aren't wooing NDP supporters, although they'll take what they can. They're looking to peel off the "blue dog" Liberals by giving them enough cover to go Con. This is what Trump did against Clinton - he ran way to the left of his party, promising better healthcare and the return of good jobs. Of course it was all BS, but it worked. With early voting coming up soon, the Libs will have to react a lot faster than they have been if they want to hold onto power.

The Lib campaign has been plagued by gaffes, Cap. If they are to do better, they'll have to prove that O'Toole's rhetoric can't be believed. That won't be easy.

I witnessed this phenomenon during the 1974 election campaign. I was assigned to cover the NDP leader, David Lewis.

Canada was in the throes of what seemed like runaway inflation. The Tory leader campaigned on the need for wage and price controls. For Trudeau that was manna from Heaven.

Trudeau adopted a "gunslinger" pose where he would get up on stage with his sleeves rolled up, go for his gun, and shout "zap, you're frozen."

As the campaign wore on, NDP support evaporated as the labour vote defected to the Libs. On election night the NDP were all but wiped out. Even David Lewis couldn't hold on to his seat.

That, however, was Pierre Trudeau, a powerful and dynamic campaigner. His son seems to have inherited little of the father's elan. He doesn't exude his father's dynamic confidence.

Can Justin Trudeau conjure up the magic his father showed in 1974? Perhaps but I don't see it.

There are bound to be surprises, Mound. But, at the moment, the question seems to be, "Who will form the minority government?"

I don't have a lot of confidence in polls in the "dog days of summer". The results may be accurate but I rather suspect unrepresentative samples.

Recently, a number of polls have had problems with accuracy, jrk. I continue to offer no predictions.