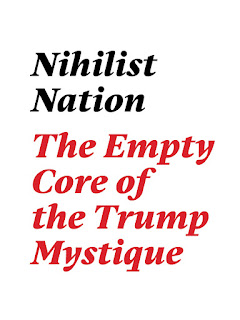 Some commentators claim that Republicans are the new hippies. Max Boot writes:

In the 1960s, [Kevin Williamson] points out, the liberal counterculture attacked the establishment, while the GOP stood for order and authority. Today the roles are reversed: Liberals are the ones who respect the authority of institutions such as the federal government, the scientific community, universities and schools, the media, big business, the military, and the FBI, while the right subjects them all to “ridicule and scorn.”

It's an interesting comparison -- not without a little humor. But Boot writes that it's much worse than Hippie Redux:

A less kind but more accurate characterization is to argue, as Edward Luce did in the Financial Times, that “Republicans have become the party of nihilism.” Like the Joker, a lot of Republicans just like “to watch the world burn” — quite literally, in the case of their climate denialism. Republican anarchism is also on full display with regard to the Jan. 6 attack on the Capitol and the covid-19 pandemic.

Consider the recent hearing where four police officers testified about the events of January 6th:

On July 27, four police officers delivered harrowing testimony before a House select committee about how they had been assaulted by insurrectionists. In the past, these heroes might have been championed by the party of “law and order.” But it turns out that Republicans only “back the blue” when officers are accused of employing excessive force against minorities. When officers try to stop a Trumpist lynch mob, Republicans bash the blue.

Newsmax’s most popular host, Greg Kelly (son of a former New York City police commissioner), accused one of the officers of being “wrapped too tight.” Fox’s top host, Tucker Carlson, said they were “lying” and literally snickered at their testimony. Also giggling was professional provocateur Dinesh D’Souza. Fox host Laura Ingraham sneered that the officers deserved acting awards for their “third-rate theatrics.”

The only thing missing was to have these right-wingers call the officers “pigs,” as 1960s radicals did. Oh, wait — Carlson earlier employed that very epithet to describe Gen. Mark A. Milley after the chairman of the Joint Chiefs of Staff dared to defend the teaching of critical race theory at the U.S. Military Academy at West Point. Of course, that’s almost mild compared with the vituperation then-President Donald Trump directed at the FBI for investigating his ties to Russia — he called FBI agents sleazebags, traitors and a “disgrace to our country.”

The right these days bashes not only the military and law enforcement but also every other institution that it accuses of having been taken over by “the left” — which means almost every national institution except the Supreme Court and, heaven help us, Fox “News” Channel.

All across the United States, Republicans are on a tear. They are the enemy of all the country's institutions:

Corporations earned the right’s ire for condemning Georgia’s voter suppression law and for deleting right-wing social media accounts that incite violence. Schools and universities have become objects of rightist wrath for teaching about America’s history of slavery, segregation and continuing racism — which conservatives denounce as “critical race theory.” The media establishment has long been an object of hatred but all the more now for exposing Trump’s lies — the “enemy of the people,”Trump called us. Scientists have faced threats and harassment for showing that global warming is real and needs to be addressed.

Most sinister of all, the medical establishment has become a target for attempting to fight a pandemic that has killed more than 613,000 Americans. The night after Tucker Carlson mocked the officers who defended the Capitol, he accused Anthony S. Fauci, the nation’s top infectious-disease expert, of having “helped to create covid in the first place.” It’s a lunatic charge, but one that has become popular on the right. Rep. Marjorie Taylor Greene (R-Ga.) called Fauci an “enemy to our nation” and said he “deserves to go to jail.”

Republicans have adopted the personality of Donald Trump -- the Nihilist-in-Chief.

While it's only a certain kind of person who is vulnerable to falling into these right-wing movements, it's also true that capitalist-driven hate radio and propaganda "news" sites worked diligently to create this culture.

The hippies were against imperialist war, racism, authoritarianism.

These right-wing nihilists cheer for everything in that list except for imperialist war which they are honestly iffy about.

I also consider it a tragedy that liberal types now believe in institutions like the CIA and the FBI.

There's a big problem with the horseshoe view of American politics that sees left-wing '60s hippies and right-wing Trumpists as equivalent nihilists. The problem is that the radical leftists had little to no political influence, let alone actual power. That hasn't changed and won't change no matter how much Fox News squawks about "the Squad."

The radical rightist, OTOH, have taken over one of America's political parties and are supported by just under half the population, including the majority of American elites (Trump beat Biden among voters earning more than $100,000 annually). The radical right is infinitely more dangerous, and the country is ill served by a media that for decades has defaulted to a "both sides" false equivalence that allows Republicans to escape accountability for their lies and bad governance.

I agree, Cap. The counter culture of the '60s couldn't hold a candle to today's Republicans. Say what you want about the Hippies. They weren't fascists.

"Today the roles are reversed: "

Gawd, if it were only that simple. Winston Smith would understand.

'War is peace. Freedom is slavery. Ignorance is strength.'

It appears that the Republicans have used 1984 as a how-to-handbook, PoV.

.. I mentioned in comment to Lorne this AM, the reality of 'polarization'
But that was in the context of Covid vaccines
That it's a spectrum of polarization

However re your post the result is choosing sides
regardless of the reasons. It's black and white
I believe this leads to 'vote the party'

Now that is defying reality ..
And one may wonder what is driving that monstrous ignorance
People actually elected that buffoon !

Regarding the buffoonery of Partisan Talk Shows
It's important to remember 'it's the attention economy'
anc pondscum like Tucker Carlson, or Alex Jones
are monetizing hate, and being contraversial as did Donald Trump
as well as swimming to the top of the food chain
of 'the attention economy' and trying to stay there

"Monetizing hate" is an accurate description of what's going on, sal. Unfortunately, you can make big money fanning the flames of hate.