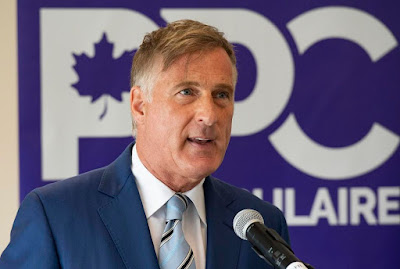 Maxime Bernier is still around. He's hoping to make it into the Leaders Debates. Stephanie Levitz writes:

For Maxime Bernier, the early polls do matter: for him to participate in the official leaders’ debates during this campaign, his People’s Party of Canada needed to be registering four per cent support in national polls as of Aug. 20.

As in the 2019 campaign, Bernier is banking on being on that stage — but this time, he thinks people will listen to him differently. This time around he's pitching himself as a harbinger of freedom:

“Before, when I was talking about freedom, people would say, ‘Maxime, what do you mean, freedom?’”, the former Conservative cabinet minister said in an interview with the Star.

“And now, they know. They have a big example in front of them every day of their life.”

Lockdowns, public-health orders and the debate about mandatory vaccinations have become Bernier’s political bread and butter during the COVID-19 pandemic.

We are losing our freedoms and our rights,” he said.

Among other things, he wants to bring down or eliminate certain tax rates, drastically reduce immigration levels, and hand power and funding responsibility for health care entirely to the provinces. His party doesn’t have a strategy for dealing with climate change, which it claims — contrary to the overwhelming scientific consensus — is occurring naturally. Bernier says government intervention on climate is both costly and pointless.

How much traction will he get? That remains to be seen. But one thing is abundantly clear: While the United States has its morons, we have our own.

Well, as of today's date the PPC is registering 3.5% support according to the CBC's poll tracker. That ought to mean that Bernier won't be polluting the debates with his free-dumb arguments. When even libertarian theorists concede mandatory vaccinations as a legitimate state function, you know Bernier is coo-coo for Cocoapuffs.

I can only assume that Bernier doesn't read much, Cap. When you suffer from terminal certitude, you don't need to read.

He came extremely close to becoming leader of the reformatories. There are a lot more loonies out there in CPCland than we acknowledge and O'Toole is beholden to them.

There are a lot of them out there, rumley. In our riding, the Libs won because the Tories and the PPC split the vote between them.

Rumley:
"He came extremely close to becoming leader of the reformatories. "

I think he actually won that contest. Never heard before or since, of immediate ballot destruction.

Owen, about that PPC/CPC split, are you in one of these?
"People’s Party may have cost the Tories 6 ridings on election night
In five ridings Liberals won Monday, the Conservative vote total plus half the PPC vote total is higher than the Liberal candidate’s.

With half the PPC votes added, the Conservatives win these close ridings:

In a sixth riding, South Okanagan-West Kootenay, adding half the PPC votes to the Conservatives’ results in a two-vote NDP victory, which would have meant an automatic recount. With so small a margin, it’s hard to predict how that would have been resolved. (On Monday, the NDP won the riding by 796 votes)"

In the marketplace of ideas, Bernier occupies a very small corner, Owen. To include him in the debates would only be a further debasement of them.

He's one of those people who lead a radical fringe, Lorne. But he's got a loud voice.

The total Con/PPC vote was very close to the Libs total, PoV. In the end, the Lib winning margin was 2.4%. Those of us who voted strategically made the difference.

Northern PoV - if the PPC wasn't running you cannot assume those votes would have gone Conservative.

True, Uzu. But, in our own riding, most of the PPC supporters have past connections with the Conservative Party.

It's all over the news that Bernier will not be invited to the debates. Annamie Paul seems to be the cutoff.

The numbers seem to indicate that he won't make the cut, Mound. I'm interested in his numbers in our riding. If they're low, the Conservatives have a good shot here.