How The Right Defines Freedom 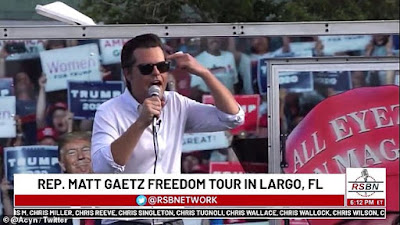 Lots of Canadians used to winter in Florida. Not so much these days. Florida is not a healthy place to spend your time. Ron DeSantis, Florida's governor, has a lot to do with the situation. Paul Krugman writes:

At every stage of the pandemic DeSantis has effectively acted as an ally of the coronavirus, for example by issuing orders blocking businesses from requiring that their patrons show proof of vaccination and schools from requiring masks. More generally, he has helped create a state of mind in which vaccine skepticism flourishes and refusal to take precautions is normalized.

One might have expected or at least hoped that DeSantis would reconsider his position. In fact, he has been making excuses — it’s all about the air-conditioning! He has been claiming that any new restrictions would have unacceptable costs for the economy — although Florida’s recent performance looks terrible if you place any value on human life.

Above all, he has been playing the liberal-conspiracy-theory card, with fund-raising letters declaring that the “radical left” is “coming for your freedom.”

Which raises the question, what does DeSantis -- and the political right -- mean when they use the word "freedom?"

My answer is that when people on the right talk about “freedom” what they actually mean is closer to “defense of privilege” — specifically the right of certain people (generally white male Christians) to do whatever they want.

Not incidentally, if you go back to the roots of modern conservatism, you find people like Barry Goldwater defending the right of businesses to discriminate against Black Americans. In the name of freedom, of course. A lot, though not all, of the recent panic about “cancel culture” is about protecting the right of powerful men to mistreat women. And so on.

Once you understand that the rhetoric of freedom is actually about privilege, things that look on the surface like gross inconsistency and hypocrisy start to make sense.

Why, for example, are conservatives so insistent on the right of businesses to make their own decisions, free from regulation — but quick to stop them from denying service to customers who refuse to wear masks or show proof of vaccination? Why is the autonomy of local school districts a fundamental principle — unless they want to require masks or teach America’s racial history? It’s all about whose privilege is being protected.

Recently, the infamous Florida congressman Matt Gaetz pointed to his head and proclaimed, "I have the freedom variant." He's got a variant. But it has nothing to do with freedom.

Email ThisBlogThis!Share to TwitterShare to FacebookShare to Pinterest
Labels: Freedom and Privilege

Then there is that conundrum noted by Augustine, "Lord, give me chastity and continence, but not yet."

This is an important discussion, Owen. Thanks for your post.

When I was in Teachers College, Toby, we all read Neill's book Summerhill. We all admired it and tried to implement some of his strategies. They didn't work very well -- because most kids thought that freedom meant license.


When I read accounts such as Krugman's I instinctively wonder how this madness ends. Like the collision of tectonic plates, something has to give and the longer the delay the more tension builds ensuring a more destructive seismic result.

America's never-perfected democracy is brought under enormous pressure that, with time, seems to sap its resilience. Democracy becomes tenuous, similar to a perch in a bird cage. It's fine but you have to work to avoid falling off. Americans seem to be losing the will to hold on.

Despite its lofty pretensions, the U.S. was never all that fond of democracy. Nancy Isenberg's book, White Trash, explores the centuries prior to Independence Day to chronicle that. The Founding Fathers and their colonial predecessors had little time for the Joe Lunchbox plebs.

The Citizens United case was the mine canary's terminal chirp. Along with dozens of other insults, it ushered in an age of transactional democracy similar to what occurred in the final two centuries of the Roman republic. It was laying to rest what we really just a pretence.

It's not that DeSantis wants to kill his fellow Floridians. It's that, in a transactional democracy, even the health of the plebs has a cost and balances must be struck so long as they favour capital, enterprise.

We like to imagine that our leaders hold our safety as their foremost responsibility. That's even written into Canada's Emergencies Act. Yet, after the summer we've endured, the petro-state remains alive and well, the shovels still digging Justin Trudeau's expanded pipeline to tidewater so that we can flood world markets with climate-killing diluted bitumen. That it will claim lives is beyond question - mainly in other countries, initially. What is that but a negation of the right to life?

Long after asbestos was banned at home as a health hazard, Canada pursued Third World markets for the stuff. It took decades before we shut down the mine. Not one of our proudest moments.

Pure democracy, the sort we were brought up to believe was our inalienable birthright, is waning. It's losing popularity at home, certainly in the United States, and is being transformed by authoritarians elsewhere into illiberal democracy. Can you see a glimmer of Viktor Orban in Rick DeSantis?

Transactional democracy is said to have been a major factor in the fall of Rome. The citizenry was displaced by slaves who tilled the wealthy's farms. Riots ensued and, when outside threats emerged, the old will to defeat them failed.

A house divided against itself indeed.

Lincoln was an extraordinary leader, Mound. Democracy in the United States prevailed because he felt "malice toward none." It's hard to find his like today.

Krugman writes that what Republicans actually mean by "freedom" is "closer to 'defense of privilege' — specifically the right of certain people (generally white male Christians) to do whatever they want." I realize that NYT editors disagree, but it's time to call this sort of privilege what it is - white supremacy.

As Adam Serwer pointed out in his essay, "The Cruelty Is The Point," "Trump’s only true skill is the con; his only fundamental belief is that the United States is the birthright of straight, white, Christian men, and his only real, authentic pleasure is in cruelty. It is that cruelty, and the delight it brings them, that binds his most ardent supporters to him, in shared scorn for those they hate and fear: immigrants, black voters, feminists, and treasonous white men who empathize with any of those who would steal their birthright." DeSantis has read the room and realizes that he needs to deliver this cruelty to stand any chance of winning the GOP presidential nomination in 2024.

So DeSantis bans businesses from demanding proof of vaccination and schools from demanding masks. The main impact of this will be felt in Black and Hispanic communities, who like Republicans have low vaccination rates. But Blacks and Hispanics tend to live in more crowded conditions, go to schools with larger classrooms and work in low income jobs that bring them into contact with people. They are DeSantis' real target. They, and the rest of the population, are learning that the liberal state will not protect them. They are being trained to accept fascism.

That's exactly right, Cap. What happened on January 6th was a dry run. There's another one coming.