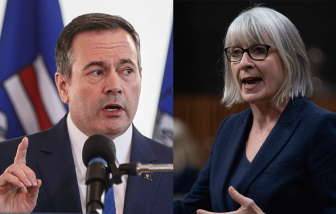 Yesterday I wrote about two American governors whose policy decisions regarding the Fourth Wave are idiotic. Today, I turn my attention to Jason Kenney. Alanna Smith writes:

Hajdu earlier penned a letter to her Alberta counterpart saying she agrees with the Canadian Paediatric Society's description of Alberta's move to lift all COVID-19 measures as an "unnecessary and risky gamble."

"We're not going to ... take lectures from Minister Hajdu, particularly when it appears that she and her boss (Prime Minister) Justin Trudeau are hell-bent on a federal election campaign," Kenney said Friday at a news conference in Bowden, Alta., about drought support for farmers.

"If they really are that concerned about COVID, then why is she getting ready to put up campaign signs?

It sounds a little like Ron DiSantis telling Joe Biden to look after the U.S. border. It's an old magician's trick -- distraction. But Albertans are protesting Kenney's take on COVID:

Dozens of people chanted “test, trace and isolate” outside the legislature in Edmonton on Friday. It was the ninth consecutive day of protests, which have also taken place in Calgary.

Organizers said they will continue to protest every day until Aug. 16 – the day quarantine requirements lift in Alberta for people infected with COVID-19.

David Walsh, 14, said even though he is fully vaccinated, he is concerned for his peers when they return to school in September.

It’s idiotic, quite frankly,” Walsh said. “I’m worried about asymptomatic people in the school ... and not having to isolate anymore is concerning. I’m worried about my classmates and those who have been fed misinformation and haven’t been vaccinated.”

Businessman Rob Sproule attended the protest with his wife and children. He said he is gravely concerned about a fourth COVID-19 wave.

“No other jurisdiction has gone this far. Dropping restrictions is one thing. You don’t have to take it one step further and treat COVID like it’s the cold. It’s not a cold," said Sproule.

As concerns mount, so are cases in Alberta. Thursday marked the single highest daily case count since July 1 with 397 new infections. Alberta also had the highest active case count in all of Canada, according to federal data.

On Friday, the province reported 369 more cases, and 11 new hospitalizations.

Kenney indeed is closely allied with the new bully breed on the American right, many pictures with the odious liar Cruz exist. These creatures just don't seem to want this pandemic to end, disregarding experts, spinning lies to their followers (sadly, whom are swallowing the BS fully) and creating horrid economic conditions for small business, just adds to a list of why they all need to be kicked to the curb come election time. Polling shows the UCP in danger of being wiped out, (one can only hope) and a return to the great leadership of Rachel Notley in '23 but a lot can happen between now and then. Now if someone can just open up Kenney's tightly locked closet door, we might just get somewhere. In the meantime, ER's ICU's and the morgue will fill up fast this fall and winter thanks entirely to his failed bid at out trumping his US counterparts. Did I say I truly loathe the guy? BC Waterboy.

And it sounds like lots of Albertans now agree with you, waterboy.

Can the lieutenant general dissolve the legislature and call an election? Somebody has to stop Kenney... he's a madman.

I don't think so, Gordie. Albertans are stuck with Kenney. It pays to make wise choices.

Alberta needs recall legislation. I don't have a google account.

I knew that Harper kept his Cabinet on a tight rein but I had not realized how tight until Kenney really got loose in Alberta. Kenney does not seem stupid à la Trump but he clearly is unable to grasp changing circumstances---witness his failure to uderstand the Alberta oil boom is over---and this latest move while being at war with the medical professions suggests he (and some ministers?) are in a imaginary world of their own.

Still, I am amazed at how he and the Alberta Health Minister managed to throw the Chief Medical Officer of Health under the bus without a peep out of her. I would have thought she would have resigned by now as a simple matter of professional self-defence.

It seems to me, jrk, that she's in an untenable situation. We'll see how long she stays in the job.

You can read Kenney's state of mind from his beltline.

This time last year he was slimmed down, looking fighting fit. Yesterday it was Little Tubby strolling through a pasture with starving cattle, an image that made me wonder if the premier had been eating those poor critters' hay.

Kenney announced a modest drought relief programme for Alberta ranchers. He's going to ask the feds for most of the funding. He promised the money before he asked. Strange.

It's summertime again. With the rest of Canada on fire or sucking massive amounts of PM2.5 particulate in their lungs, Vancouver Island and its clear Pacific breezes are like a Coleman lantern to a moth. I saw an Alberta pickup cruising the grocery store parking lot and was amazed how many people zoomed in on the licence plate. A couple were noticeably vexed.

We went into tourism season last year with Covid virtually crushed. That lured an unduly large contingent of mainlanders. By the end of the summer, Covid numbers rebounded. Back to lockdown, masks, distancing, washing and sanitizing. We're still left with our homegrown anti-vaxxers and, believe me, you get a mile or two off the main road and out in the woods and you find some very strange people who embrace some very strange theories.

Between the homegrown anti-vaxxers and the inevitable Typhoid Mary tourists it could be a field day for the Delta variant.

They're playing the old Con two-step in AB. Dr. Hinshaw delivers a message totally inconsistent with other public health officials and won't say how she arrived at her decision or release her modeling. Then Kenney steps up and indignantly says that politicians shouldn't interfere with public health officials. What a joke - Kenney's obviously running this clown show.

Meanwhile, in Ontario, Dougie's step 3 reopening is going true to form, with r values rising from 0.78 (declining spread) to 1.18 (rising spread) as of Aug. 3. Active cases are highest in the under-20 cohort. With students heading back to the classrooms in a month, Ford continues to dither about adding Covid-19 to the list of mandated school immunizations. Sorry, there's no constitutional right to infect others, and vaccines are not a deeply personal decision. They're a standard public health requirement around the world. We've gone as far as we can with carrots, it's time to break out the stick.

That is precisely my worry, Mound. Delta doesn't concern itself with which province you call home. All it cares about is whether or not you've been vaccinated.

Precisely, Cap. In this situation, the stick is mightier than the carrot.

I love the way that Boston College used the stick. The Jesuit school requires all students, faculty and staff to get a Covid vaccine prior to the start of the fall semester, unless they are granted religious or medical exemptions. The usual right-wing Catholics immediately claimed the religious exemption. But the college was having none of it, pointing out that the Pope and the Archbishop had said that it's the duty of all Catholics to get vaccinated to avoid infecting others. Of course, this sent the wingnuts around the bend. Win, win.

As someone who graduated from a Jesuit college, Cap, I can attest to the fact that the Jesuits love to win an argument.

Awwww! Kenney is a man without his to-to. Anyong

He's not who he said he was, Anyong. But, then, lots of people knew that.

One could get the impression Kenny believes if he says something long enough, it will become true. Usually we call that being delusional. Don't know where the man's brains are but his actions, in my opinion, indicate they're missing.

Kenny most likely is of the opinion the Pope is too far left. There are Catholics who do not agree with the Church's teachings. Those catholics remind me of the far right protestant "holy rollers" you see in the U.S.A.

The people of Alberta voted for Kenny. Now they can learn to live with it or die because of it.

Recall legislation is on the books in B.C. However, whenever there was an attempt to use it, the organizers failed to succeed.

Back in the days of the B.C. Lieberals, more like Conservatives, the M.L.A.s were able to force Premier, gordon campbell, el gordo, to resign. Ten of the M.L.A.s signed a letter advising el gordo to resign. He had lied to them and the public. Off he went. You do need some M.L.As. with back bone to do this though.

Some of his MP have criticized Kenney, e.a.f. But they're further to the right than Kenney is.