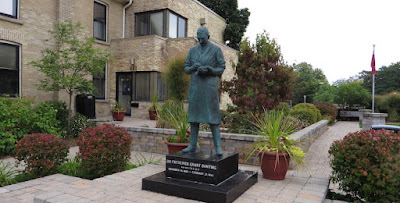 Drs. Banting and Best must be rolling in their graves. Linda McQuaig writes:

In the 1920s, Canada became world-renowned for discovering insulin and providing it at very low cost to Canadians and diabetics around the world.

Yet today, this iconic achievement lies in ruins; millions of diabetics in Canada and elsewhere are at the mercy of multinational drug companies that have dramatically jacked up the price of the miracle drug, which many diabetics need to survive.

This is exactly what Canadian scientists Frederick Banting and Charles Best desperately sought to avoid when they generously handed the patent for their insulin discovery over to U of T and its Connaught Labs, which was committed to ensuring insulin would benefit humankind, not corporate investors.

Things changed when Big Pharma discovered how to produce genetically engineered insulin rather than animal based insulin -- and when Brian Mulroney sold Connaught Labs to French drugmaker Sanofi:

Starting in the 1980s, multinational drug companies Eli Lilly, Novo Nordisk and later Sanofi got around patent restrictions by producing a genetically engineered form of insulin. The new insulin turned out to be much more expensive and posed serious risks -- including even death -- for some users.

Even so, the three companies soon phased out the old, animal-based insulin they'd long been producing under Connaught guidelines. They also drove small producers of the old insulin out of business and took over 95 per cent of the world market with the new insulin.

Today insulin costs an individual about $2500 a year -- "roughly five times the 1985 cost (adjusted for inflation)."

Now Justin Trudeau has given Sanofi $470 million dollars from taxpayers to re-establish a production facility in Canada.

Canadians are caught in a classic pincer move, with Big Ag profiting by creating unprecedented levels of obesity and diabetes and Big Pharma price gouging on insulin.

Still, it's much worse under "free market" conditions. A vial of insulin in the US costs between $175 and $300. With insulin-dependant diabetics typically using two to three vials a month, that amounts to $4,200 to $10,800 annually. It's no wonder the US represents 15% of the global insulin market, but generates nearly 50% of the industry’s insulin revenue. US diabetics meanwhile scrimp or skip doses, leading to worse health outcomes. This is why diabetic snowbirds bring as much insulin as they can to the US, since chronic drug costs are typically not covered by travel medical insurance.

Yet, the Canadian government fights for strong patent protection to protect these price-gougers and even hands them subsidies without guarantees. I'm really not seeing much progressive about this government.

Prior to the Reagan/Thatcher reverse revolution, Keynesians had us heading in the right direction. A form of regulated capitalism, within a just and mixed economy was emerging.

With the privatization and financialization of EVERYTHING (like the loss of Connaught Labs) capitalism has become so extreme and top heavy, it will likely collapse. Let's hope it happens well before the general eco-collapse that is coming.

An issue like this is where the rubber hits the road, Cap. Clearly, this is a case where profits are much more important than people.

The planet can no longer survive global capitalism, PoV. We need to reinstitute guard rails -- something Keyseanism maintained was essential.

The latest on disaster capitalism seems relevant here, Owen, as both Pfizer and Moderna are apparently raising the price of their vaccines for the EU:

Thanks for the timely links, Lorne. It's all about making profits fast while the irons are hot, Lorne. Squeeze 'em while you can.

Trudeau is doing a good job in some ways and is blazingly incompetent in others. About par for a Prime Minister. Re the Sanofi move, Trudeau is a fairly conventional neo-liberal thinker in economic terms and a renewed "Connaught Labs" model would probably not occur to him without a strong advocate in Cabinet and I doubt there is anyone like that there.

Old data but IIRC the Oxford-Astra-Zenica is about US$3 per shot and the Russian Sputnik 5 is about US$ 5-6. For some reason both have bad press*

* Full Disclosure: I am a survivor of two Oxford-Astra-Zenica shots.

Increasingly, jrk, the notion of a mixed economy in Canada has gone by the boards.

Like everything else in business, jrk, self-promotion promotes the bottom line.

Clearly most governments - both left and right - have been captured by Big Business. Some how illegal graft and corruption has been supplanted by lobbying, which includes a variant of graft and corruption through so-called "political donations".
Much of Big Business is, at minimum, Oligarchic, which means they have the power to influence market prices and wages creating greater inequality. Tepper and Hearn in "The Myth of Capitalism" propose governments enforce the antitrust laws that are in statute, and if necessary strengthen existing laws. This was done in the US and other countries over 100 years ago which, after the 2nd world war, brought a very big and strong middle class. Unfortunately, the tide started against the middle classes when Reagan came to power, along with Thatcher and Mulroney.
Despite the signing of many carbon emission reducing treaties and agreements, governments' carbon emission curtailing actions have actually seen the opposite happen. They keep stalling to act as they must to reduce carbon emissions, concluding they won't until forced to by us citizens taking action, and not necessarily at the polls.
Roger Hallam advocates, we the people, somehow force the Governments to hand their power willingly over to an elected citizens' committee to correct their mistakes and inaction for climate change. Since this latter topic is crucial to mankind's survival, we, the people are going to have to act. Soon.
If not, we will probably see unmitigated turmoil and destruction on our own streets as inequality increases and the quality of our living environment decreases.

The biggest problem we the people face, DJF, is navigating through the disinformation -- which is everywhere.

Large Pharma Corps have more than some of our politicians in their pocket. Unfortunately for Canada, Mulroney seemed to have a penchant for these "beneficial" arrangements. His Minister of Health at the time appeared to have quite an attitude about having to publicly provide us peons with any info, but she was good at navigating the process of changing the patent protection from (what I seem to remember) was 12 years and increasing it to 18 yrs.

Fortunately, when she got defeated, she picked up a pretty lucrative gig becoming their spokesperson on all matters and info that needed to be "sold" to us, the public. I don't know if Brian was a sharing and caring leader to her, but we can all guess.

So, with patent protection extended, the practice commenced with changing minor packaging or a minor ingredient (you know, new and improved) that then seemed to fit into the new. improved, patent protection life. That's when I noticed that GPs were coming up with all sorts of "new" products to try before they were prescribed. It was the perfect marketing scenario - along with special meetings/conferences - all complementary - that rewarded those that helped with this marketing ploy.

Having spent 20 winters in the US, that's a whole other story which I won't bore you with today, but had even more effect on the prices those US citizens who have the unfortunate experience of trying to live with poor health (but Mexican towns on the border sure did benefit).

Big Pharma has known for years how to get what they want, Lulymay -- and they've got it.