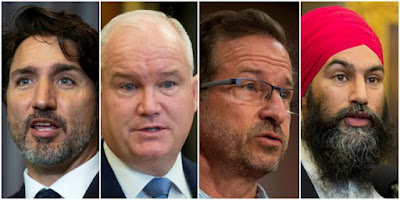 We are having an election because Justin Trudeau wants a majority government -- and he thinks he can get one. Certainly, the turmoil in the Conservative Party could work in Trudeau's favour. Stephen Maher writes:

These internal divisions are making it hard for O’Toole to stake out defensible turf. In his first media availability after the writ drop on Sunday, he tried and failed to dodge questions about vaccine mandates. He likely is not able to support them without his MPs rebelling, so he is jammed, stuck opposing a popular policy, which the Liberals will be delighted to discuss whenever anyone asks them about anything even vaguely pandemical.

O’Toole has shifted his party toward the centre, but the right wing is on the brink of open rebellion, and it is not at all clear that he has gone far enough to the left to appeal to the suburban voters he needs to break through in Ontario and Quebec. Or maybe his practical, sensible, centrist approach will find a constituency when voters get a better look at him. We don’t know yet, and should 36 days from now.

Jugmeet Singh, on the other hand, appears to have made inroads with voters:

Jagmeet Singh . . . looks chill. After an awkward start as leader, he is connecting with voters. As Philippe J. Fournier points out, the polls show he could stand between Trudeau and the majority he wants, if TikTok views translate into votes, which is something we stand to learn on Sept. 20.

It's hard to say what role Yves Francois Blanchet will play in this election. The resurgence of the Bloc Quebecois had a lot to do with the SNC Lavalin Affair. Quebecers always consider how well a prime minister is looking after their interests. The debacle over SNC put Trudeau in lots of Quebecers bad books. Perhaps his response to COVID will cause them to re-evaluate his commitment to  la belle province.

Time will tell how wise Trudeau has been. Maher concludes that "this election is unnecessary, but that doesn’t mean it won’t be useful."

The election is indeed unnecessary, since the Libs were able to pass their agenda in the minority government. That said, I have an issue with the media spinning this as "voters don't want an election," as the CBC was doing yesterday citing polls.

What's that supposed to mean? That we'd be better off without? That voters aren't interested in democracy? That voters are too lazy and apathetic to care? I see no reason to poll voters on whether they want an election. The question itself is irrelevant - we've got one now, what difference does it make whether people want it?

The real problem is when you need an election and can't get one, Cap. As long as we have elections, democracy has a chance to survive.

I agree with Cap. The same thing happened in BC. The election was called, and even after it was in the books people were still complaining about Horgan calling an election during a pandemic. We are having an election. So get over it and make a smart vote.

Aside from the cost, I have no objection to having an election. It gives us a chance to toss a bad government. With mail-in voting, it only takes a few minutes to vote. Surely that's not an inconvenience to most people.

In this election, I think the Liberals will be re-elected with a minority government.

Personally, I think Trudeau is arrogant and a habitual liar and would like to see him gone. Every time I see him on tv I start to seethe.

At the moment, Gordie, I'm not impressed with anyone.

Why can’t we Canadians vote an NDP government to replace the
Liberals and the Cons. At least it would be a strong message. I was furious knowing that the PM was going to do what he did. T2 wants a majority so he can tax the backside off of us and do it with impunity.
Even a minority NDP government would be better than what is facing we Canadians should T2 or Tool take the reins. Anyong

A good question, Anyong. But I don't have a good answer.