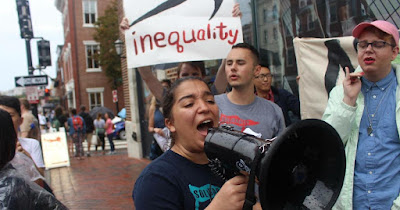 Paul Krugman writes that, when it comes to employment, workers are not going back to the pre-pandemic world:

After a year and a half of working from home, many don’t want to return to the stress of commuting. And at least some of those who were forced into unemployment have come to realize how unhappy they were with low pay and poor working conditions, and are reluctant to go back to their previous jobs.

In other words, some workers really don’t seem willing to go back to their old jobs unless offered substantially more money and/or better working conditions.

Conservatives are upset. They're predicting doom:

Conservatives insist that it is indeed a bad thing: Workers, they say, are refusing to take jobs because government aid is making unemployment too comfortable. But they would say that, wouldn’t they? Remember, they said the same thing in the aftermath of the financial crisis, claiming that the unemployed were being coddled — when the actual reason recovery was slower than it should have been was the destructive fiscal austerity imposed by Republicans in Congress.

They simply don't understand what has happened:

If it wasn’t government benefits, what explains the reluctance of some workers to return to their old jobs? There may be several factors. Fear of the virus hasn’t gone away, and it may be keeping some workers home. Child care is also an issue, with many schools still closed and day care still disrupted.

My guess, however — and it’s just a guess, although some of the go-to experts here seem to have similar views — is that, as I suggested at the beginning of this article, the pandemic disruption of work was a learning experience. Many of those lucky enough to have been able to work from home realized how much they had hated commuting; some of those who had been working in leisure and hospitality realized, during their months of forced unemployment, how much they had hated their old jobs.

The pandemic has caused us to re-evaluate our priorities. And they are not the priorities that conservatives hold dear.

After more than a year of getting the job done from home, is it any wonder that people are reluctant to go back to commuting an hour each way so managers can time their washroom breaks? The expectations around work in North America have become toxic. It's no wonder people are pushing back.

The power dynamic is shifting, Cap.

I have always been of the opinion that any crisis is exploited by many and that by criticizing only the underpaid unemployed is always the same old finger pointing. Those same complaining conservatives are also the ones who have been enjoying the last 18 months working from their cottages while they have their condos in the city renovated. They are preparing to accept their expected rewards of a new "hybrid" type of "at home" working schedule. You can be sure that the schedule will be a three day work week that will probably favour Tuesday/Thursday at the office.As the dust settles the last hold outs for the "Mac" jobs will finally be forced back to work at a minimum wage that will reflect their obstinance. As with any crisis, the long term effects will be just that, long.I view my own situation in my 67th year as I juggle my "retirement" and looking after my daughters future to be my most trying times ever.

Low-wage slavery has been an odious thing for a long time, Owen. That some are breaking free of those fetters is good to see, but at this point it is anyone's guess as to whether their new-found leverage will last.

You're right to point to the long-term consequences which the pandemic will have on the young, zoombats. You and I have lived most of our lives. What the future holds for our children should be our chief concern.

We are at an inflection point, Lorne. We could see a more equitable society at the end of all this. But the forces of reaction have lined up, and they will battle progressive changes to the last breaths.

Well prior to Covid-19 scholars such as economist James Galbraith and public intellectual Yuval Noah Harari wrestled with the future of labour, "paid work," in the age of automation, robotics and artificial intelligence and algorithms.

They foresaw a world in which much human labour falls redundant and new means of wealth distribution are wanted but fiercely opposed by those with the whip hand.

Galbraith discusses how, whenever there's a disruption in the economy - a recession or, of course, a pandemic - corporations use the down time to find ways to modernize, cut costs and inevitably their employees aiming to return to profitability and an increased market share once the recovery begins.

If Harari and Galbraith are right, the struggle between labour and capital may become hotter in the post-pandemic era. This is when, as Lincoln and Theodore Roosevelt observed, government should intervene to expand the rights and power of labour. I don't see any sign of that, have you?

These are issues that Krugman tends to ignore. Despite his enlightenment, when it comes to problems such as perpetual exponential growth, Krugman is no visionary. That's what makes a column such as this a bit myopic and deeply hypothetical.

As I suggested to Lorne, Mound, the forces of reaction are organizing. What could be a step forward may become a march backward.