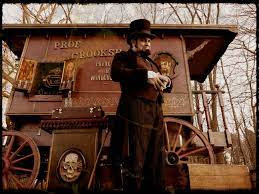 Paul Krugman writes that there's an interesting connection between right-wing politics and the peddlers of snake oil:

Right-wing extremists, and to some extent even more mainstream conservative media, rely on financial support from companies selling nutritional supplements and miracle cures — and that financial support is arguably a significant factor pushing the right to become more extreme. Indeed, right-wing extremism isn’t just an ideological movement that happens to get a lot of money from sellers of snake oil; some of its extremism can probably be seen not as a reflection of deep conviction, but as a way of promoting snake oil.

Alex Jones of Infowars has built a following by pushing conspiracy theories, but he makes money by selling nutritional supplements.

It’s also true, however, for more mainstream, establishment parts of the right. For example, Ben Shapiro, considered an intellectual on the right, hawks supplements.

Look at who advertises on Tucker Carlson’s Fox News show. After Fox itself, the top advertisers are My Pillow, then three supplement companies.

Snake oil peddlers, clearly, find consumers of right-wing news and punditry a valuable market for their wares. So it shouldn’t be surprising to find many right-leaning Americans ready to see vaccination as a liberal plot and turn to dubious alternatives — although, again, I didn’t see livestock dewormer coming.

How has this connection affected the political landscape?

Put it this way: There are big financial rewards to extremism, because extreme politics sells patent medicine, and patent medicine is highly profitable. (In 2014 Alex Jones’s operations were bringing in more than $20 million a year in revenue, mainly from supplement sales.) Do these financial rewards induce pundits to be more extreme? It would be surprising if they didn’t — as conservative economists say, incentives matter.

The extremism of media figures radicalizes their audience, giving politicians an incentive to become more extreme.

None of this would be happening if there weren’t a climate of anger and distrust for unscrupulous pundits and politicians to exploit. But the fact that extremism sells patent medicine creates a financial incentive to get more extreme.

The medicine show has always been a fixture in American life. These days, it generates insanity.

Is Krugman telling us that the rightwing media are unprincipled swine? Who knew?

It's as clear as the nose on Rupert Murdoch's face, Mound.

Republicans have lost all interest in governing, it's now all about money. Supplement sales are small-time grift, even at $20m a year. Big-time grifters like Trump and DeSantis push expensive pharmaceuticals.

Trump, of course, was notorious for pushing hydroxychloroquine, and he got numerous hospitals using it to treat Covid early in the pandemic. DeSantis is pushing Regeneron and has set up clinics in Florida to service his rich donors. For the cost of a Regeneron treatment you could equip a large town with vaccines and masks. It's no wonder DeSantis outlaws mask and vaccine mandates, they're bad for business. And nobody seems to notice, nobody seems to care. Republicans count on the wilful ignorance of Americans to make bank and nobody ever went broke doing that.

That phrase from the 1960s applies, Cap. Republicans are getting high on their own supply.