No Good Way To End A War 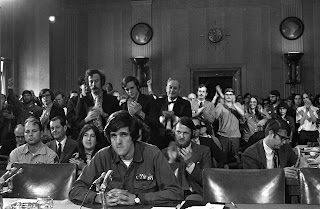 The images out of Afghanistan have been gut-wrenching. And Joe Biden has gotten -- and will continue to get -- a lot of blowback. Michelle Goldberg writes:

There are two primary critiques of Biden’s Afghan policy. The first, which is valid, blames the administration for not clearing bureaucratic obstacles that kept Afghan allies waiting for visas, possibly stranding tens of thousands of people who deserve to be evacuated. The second, which is absurd, blames Biden for defeat in a war that was lost years ago.

The journalist James Fallows claims that the war was lost when the United States invaded Iraq. It was also lost when the U.S. established a corrupt government in Kabul  -- which has been killing Afghani civilians for twenty years:

Maybe American violence in Afghanistan could be justified if it were improving the average Afghan’s life. But often we seem to have made people’s lives harder. The most recent report from the Special Inspector General for Afghanistan Reconstruction paints a damning picture of two decades of American efforts in Afghanistan: “U.S. officials often empowered power brokers who preyed on the population or diverted U.S. assistance away from its intended recipients to enrich and empower themselves and their allies. Lack of knowledge at the local level meant projects intended to mitigate conflict often exacerbated it, and even inadvertently funded insurgents.”

The ugly truth is that there is no antiseptic way to end a war:

John Kerry's question rings as loudly as it did fifty years ago: How do you ask a man to be the last man to die for a mistake?

Email ThisBlogThis!Share to TwitterShare to FacebookShare to Pinterest
Labels: Ending the War In Afghanistan

US media coverage of the Afghanistan withdrawal peaked on Aug 16 and fell off precipitously as it became clear that people weren't stranded. The US and NATO allies have flown out 58,000 people in 10 days. Polling shows Americans massively in favour of the pullout. The gnashing of teeth is coming from defense contractors, the retired generals who sit on their boards of directors and their media lackeys. Afghanistan has gone back to being forgotten, just as it has been for the past two decades.

In all the wailing about how the Taliban will make life miserable for women, there's no coverage of how the US is making this worse by turning off the money that helps feed people. According to the terms of Trump's Doha agreement with the Taliban, the US is to continue to fund Afghanistan during and after its withdrawal. Instead, the US has frozen $9.5 billion in Afghan Central Bank reserves and the IMF has cancelled its lending to Afghanistan, including $460 million for Covid-19 relief. When you consider that international aid paid for 75% of the former government's budget and accounts for 43% of economic turnover, this latest US move will have vicious consequences. Currency depreciation, rising food prices and inflation are inevitable, as one of the world's poorest nations gets the Iran, Venezuela, Cuba and N. Korea treatment. The US continue to use its financial dominance to plunder the poorest of the poor. Plus ca change...

When the U.S. wages a war, Cap, the record is clear. When they finally leave, they leave no shining city on a hill.

Not only do they leave
"no shining city on he Hill" but they leave a contingency of corruption namely in the form of Hamid Karzai who has the airport in Kabul named after him, numerous charges of somewhat dubious behaviour and s recently as this month was discussing a power share interim government with the Taliban.It's a continued legacy of a country consumed by"Manifest Destiny"

So much for the American attempt to export their better angels, zoombats.


@ Cap 10:37 am
According to the terms of Trump's Doha agreement with the Taliban, the US is to continue to fund Afghanistan during and after its withdrawal. Instead, the US has frozen $9.5 billion in Afghan Central Bank reserves and the IMF has cancelled its lending to Afghanistan,....

Never let it be said that the USA stuck to an agreement.

IIRC the Trump agreement was that US troops would be gone by May, not September. Also there was to be a cease-fire between the US forces and the Taliban. So far it looks like the Taliban has held to the agreement but in the last couple of weeks before the fall of Kabul the US resumed air attacks.

The Russians have a word недоговороспособный [nedogovorosposobnyy] (not agreement capable) used to describe the USA. It seems to imply not so much a deliberate deception as the lack of the very ability to make a deal and abide by it.

From what I have been reading treatment of most women in rural areas has not been particularly great anyway. The real effects will be felt in Kabul and maybe one or two other cities but there seems to be some hope that the *new* Taliban will not be quite as horrible as the old one. There may even be some hope that rape and sexual assault rates may go down. Neither the ANA or US forces have a great track record here. The Taliban justice system seems based on a very perverse interpretation of Sharia, and of Islam overall [1], but the judges apparently are honest.

On the other hand men women and children may be able to leave their homes in rural areas without having a US drone blow them up.

Pretty well the entire Afghan power structure in the last 20 fears was corrupt ---along with other graft it was controlling 89--90% of the opium trade.

1. I believe even the Salafi (Wahabi) in Saudi Arabia think they are a bit extreme.

Taken all together, jrk, it's a really nasty situation.

@ Owen
Taken all together, jrk, it's a really nasty situation.

Let's just say I am not planning on vacationing in Kandahar or Kabul this year or next.

Even the "reformed" Taliban look rather unpleasant but the absence of drones, bombs, deadly night-time raids by ANA and US Special forces, plus what almost certainly will be a marked reduction in corruption may help. Even the opium situation may improve.

A major worry is if the USA/G-7/IMF continue their actions to financially throttle any incoming Afghan Gov't. Afghanistan has very little of an economy. The country has been running pretty much on whatever money the US Gov't has pumped in that has not been stolen by Afghan officials, various war lords, (often the same people), and US contractors.


Of course, with unerring ineptitude, their initial moves are reinforcing Taliban ties with China, Iran(mirabile dictu), Pakistan, and Russia. I swear the recent crops of US foreign advisors, ranging back at least 30 years, acquired their knowledge of international affairs by playing Risk and Soldier of Fortune. I may be doing some of them an injustice. Some of the South West Asia experts may have made a diligent study of Kipling's work. Unfortunately they seem to have taken "The Just SO Stories" as history[1].

1. I blame Putin who has been known to make allusions to the book.

The major problem Americans have with foreign policy, jrk, that that they see all countries through an American prism. They never start with the prism through which a country sees itself.

@ Owen
Yes, an American friend did a six month posting to a US Air Force base in Germany. If I understood him correctly he was off-base once. There is no curiosity about other people in all too many Americans.

It's sad how small the world is for many, many Americans, jrk.