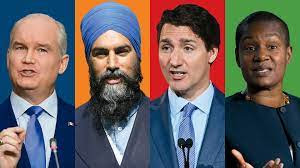 There are, Andrew Coyne writes, several big issues which should be debated in the upcoming election -- but probably won't be. Here are a few of them:

Oh, they’ll all mention the deficit. But none of them will offer to do much about it. The most that any of the major parties will promise will be a (gently) declining debt-to-GDP ratio years from now, which itself would require corrective measures none of them will propose.

You can grow your way out of debt -- either quickly or slowly:

None of the parties will put forward anything that would do much to improve Canada’s growth rate in the long run.

In the past, we relied heavily on rapid growth in the labour force to generate higher output and incomes. But with the baby boomers hitting retirement age, labour force growth has slowed to a crawl. Instead, we will have to wring more output from each worker, mostly by giving them more and better machines to work with.

Alas, that would require much higher rates of private investment than we currently enjoy, which means taxing the returns to that investment less punitively. The other ingredient of higher productivity: more competition – for example, by more fully opening industries such as airlines, financial services, and telecommunications to foreign players.

And, most tellingly, as the recently released IPCC report makes clear, the planet cannot withstand this kind of economic growth.

The federation, and the constitutional order that underpins it, is under strain, on two fronts. On the one hand, Quebec’s Bill 21, effectively banning the hiring of observant religious minorities across much of the public sector, and Bill 96, which purports to unilaterally entrench Quebec’s status as a unilingual nation in the Constitution, are plain violations of the Charter of Rights and, arguably, the division of powers.

On the other hand, Alberta is to hold a referendum shortly after the election on whether to remove equalization from the Constitution – which it has no power to decide, but which holds all sorts of trouble-making potential. The move is in part a protest at Alberta’s oil being blocked from export markets by, among others, Quebec, equalization’s largest recipient, which, again, it has no legitimate power to do.

The pressures are coming from different ends of the country and from different political perspectives. None of the parties wants to open up this can of worms.

We’ll probably hear lots about this, at least from the opposition: about the Prime Minister’s disregard for the Commons, his stonewalling of committees, frequent recourse to time allocation and omnibus bills, and abuse of the powers of prorogation and dissolution. All are indeed sins – but they were sins of the previous prime minister as well.

Parliamentary Accountability is like the weather -- which, Mark Twain wrote, everyone talks about, but nobody does anything about.

C'mon, Owen! An election is no time to discuss serious issues! It's time for us to hear about the leaders' personality flaws, resume padding, racist blackface, sex scandals, and so on. That's what Canadians want to hear as we decide which party will make policy for the next four years. We can count on our wonderful media and political backrooms to give us the dirt on these guys, not their ideas.

I can forgive Coyne's cynicism if only because I share it.

Politics reminds me of Wayang, the form of shadow puppetry from Indonesia. There's no transparency only illusion. It's all entertaining farce.

Trudeau has shown us that his word means little. No matter what he promises he later does as he pleases. There's no reason to imagine that O'Toole or Singh would be one bit better.

Politics has become Reality TV, Cap. After all, the guy on The Apprentice became president.

The choice seems to be a non-choice, Mound.

The powers that be and their spokes people would love the election to be about the stuff that Coyne noted. Sorry, but we're burning up out here in BC. We've had the hottest, driest summer ever with more forest fires than ever. By whatever name you want to call it, climate change is here. Now! Climate change should dominate every political discussion.

Those four pictures above your post, Owen, . . . none of them should be on the ballot.

Coyne plumps for exponential growth while ignoring climate change and global limits. Good thing he and the rag he scribbles for are irrelevant.

Climate change is the elephant in the room, Toby. And no one is willing to come near it.

The classic solution has become that which kills us, rumley.

While here in Alberta the topic will be whether the time ought to remain the same as now throughout the winter and the new Mavrick Party. I am sickened regarding the attitude toward Covid and Climate Change which does not exist in this part of Alberta. Anyong

I’ll have to ding Coyne on his first point. Growth is stagnant not because of an lack of private investment to buy those new machines to increase productivity. It’s stagnant because no matter how productive your workforce is, you can only sell things to people who have enough money to buy them. Productivity has been increasing for decades, but all the gains are being hoarded at the top. The end result of that is coming due. The masses cannot consume as massively as they once did, and so why invest in more production?

Granted, fixing that problem leads us right into the one already noted as missing, namely what that will mean for the environment and climate, but if this stuff was actually as easy as some people try to pretend it is, it would already be fixed.

Fixing it won't be easy, BJ. But ignoring the problem will end in catastrophe.

Bjornson makes an excellent point. Canadians are running out of money. the the past 40 years there has been a huge shift of money from the general public to a few at the top. Salaries have also not kept up with the cost of living. As employers complain they can't find workers as the economy starts to re open, other employers haven't any problem. they simply started advertising higher salaries and got the staff they needed. Many from the service sector, went into health care. Pay's better, pension, vacation, etc.

We can not continue to "expand" the economy because that will simply mean extracting more natural resources and destroying the planet even faster than its being destroyed right now. It is doubtful that any one will address the droughts we are seeing. Oh, political parties will promise to provide aid to farmers and ranchers, but the real problem which won't be addressed will be the rising cost of food. given the number of people in this country who already rely on food banks it will only get worse.

As to unity, the politicians come and go and so does the topic. Quebec is always carrying on about their position in the country and really by this time many of us just don't care. Let them carry on and just ignore them. The current government of quebec obviously doesn't care about the rights of all citizens, only those who are catholic, speak french, and are white. Once this premier goes, the next one may have a different agenda. As to Kenny and his carrying on, just ignore him. Not too many care. Kenny can stamp his little cowboy boots all he wants, but who cares. As things get worse Albertans will simply leave. We already have an awful lot of them on vancouver Island.

I have to agree with Toby. Climate change should dominate every political discussion.

The cons still seem to be denying its existence and the Greens are in a total meltdown. With Jagmeet Singh it is difficult to know what the NDP are doing. The Liberals have not had a great track record but it certainly is better than the Cons and the recent C-12 bill looks good.

They should be pounding the Cons on this. And hopefully actually doing something to slow down global warming.

The polls show that, for a majority of Canadians, global warming is an important issue, jrk. This election could be where the rubber hits the road.

Legault maybe harder to ignore because he heads a much larger province, but Kenny that's easy. He isn't the brightest guy. The province has fewer citizens than B.C. and doesn't vote Liberal or NDP at a national level very often. Kenny may talk about separatism but lets get real, its a land locked province with a tanked economy and heading into a strike with nurses, while contracting with a Texas corporation to bring in outside nurses at $75 an hr. while trying to roll back nurses salaries by 3%.