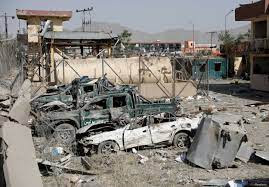 On Oct. 23, 1983, terrorists detonated a truck bomb at the U.S. Marine Corps barracks in Beirut, killing 241 American service members who were participating in a peacekeeping operation. Three months later, after failing to retaliate in any meaningful fashion, President Ronald Reagan withdrew all U.S. forces from Beirut. Reagan’s decision to cut and run had disastrous consequences. Osama bin Laden tried to replicate the Beirut Marine Corps barracks bombing with his bombing of the U.S. embassies in Kenya and Tanzania, and then to exceed it with the attacks of Sept. 11, 2001.

Now Biden is fulfilling bin Laden’s prophecy. Except after Thursday’s attack, we are no longer simply handing the country over to our enemies, as we did in Vietnam; we are now leaving under fire, as we did in Beirut. And just as the Beirut retreat inspired America’s enemies to attack the U.S. homeland on 9/11, if we pull out on Aug. 31 with our tail between our legs, it will send a signal of weakness certain to inspire terrorists around the world.

Thiessen believes that the United States must do several things:

First, we should inform the Taliban that the United States holds it responsible for this attack. It established a ring of checkpoints surrounding around the airport. It controlled who got in and who did not. It stopped both Americans and Afghans from reaching the airport — but somehow the bomber got through, and another struck at a nearby hotel. Whether letting the bomber through to the airport was intentional or simply a security failure, we should tell the Taliban it failed to meet its commitment to secure the airport — and is thus responsible for the deaths of more than a dozen U.S. service members.

Second, we should inform the Taliban that because its failure to prevent this attack has delayed the evacuation, we will not be leaving on Aug. 31 — and will not set another arbitrary deadline for withdrawal. We will depart once every American, and every Afghan ally, has been evacuated — and not a moment sooner. We will stay as long as it takes to carry out that mission. We should make clear this is not a request. They have no say in the matter.

Third, we should inform the Taliban that since it failed to establish a secure perimeter at the airport, we will do so. We are also retaking Bagram air base so that we have another airfield to use for evacuations. And we will be conducting missions across the country to retrieve stranded Americans and their Afghan allies. Any interference in these operations will have severe consequences.

Finally, we should immediately deliver justice to those who attacked U.S. forces. In a speech Thursday afternoon, Biden warned the terrorists, “We will hunt you down and make you pay.” That will be hard to do if we withdraw all of our forces from the country on Tuesday.

So much depends on how Joe Biden will respond.

Email ThisBlogThis!Share to TwitterShare to FacebookShare to Pinterest
Labels: The Attack In Kabul

Mark Thiessen was a speechwriter for both Dubya and Rummy, the two people most responsible for NATO's fruitless 20-year campaign in Afghanistan. He's obviously having difficulty admitting that both Trump and Biden were right in pulling out. And, like many in the Blob, he's looking for any excuse to stay indefinitely.

"I have never been of the view that we should be sacrificing American lives to try to establish a democratic government in Afghanistan, a country that has never once in its entire history been a united country, and it is made up of -- and I don't mean this as a derogatory, made up of different tribes who have never, ever, ever gotten along with one another....Our interest in going was to prevent Al-Qaeda from reemerging, first to get Bin Laden, wipe out Al Qaeda in Afghanistan, and prevent Al-Qaeda from reemerging, and prevent that from happening again."

"Ladies and gentlemen, it was time to end a 20-year war."

Biden is right, and has the guts to buck the military industrialists on this one.

I think you're right, Cap. But Biden's problem now is how to do things as safely as he can. Yesterday's attack underscores how difficult it is to safely get out of a war.

When the ruthless Russians left with their tails between their legs, what on earth made the US think they could do any better in Afghanistan, Owen?

I'm beginning to believe the only thing the world can do is build a huge permanent ring all around Afghanistan, don't ever enter that country again, and keep these wild and crazy bunch of tribes who cannot get along with each other confined behind a wall and let them duke it out between themselves.

Sometimes, those of us who still think (and at times hope) that we operate under some sort of democratic system of governing just have to admit that there are some places we can't fix.

Some people are their own worst enemies, Lulymay.

AS soon as the Taliban start handing out proposals for mineral rights the west will soon be back in Afghanistan, dishing out cash.
They will likely do it through foreign based subsidiaries.

You're right, Owen, guaranteeing security won't be easy. The CIA managed to undermine Soviet security by giving warlords foot-high stacks of Franklins. Never underestimate the power of large brown envelopes stuffed with cash, as one of our former PMs might say.

As an old New York politician famously said, Cap, money is "the mother's milk of politics." We'll see how skilled the Taliban are at milking their enemies.

As for Afghanistan's future under the Taliban, China may be the biggest player. The Chinese are about to start construction of a new highway from their Afghan border to Kabul. For years they've been stitching up the rights to Afghanistan's mineral resources. With the Talibs in control they're also talking about opening a pan-Afghanistan land route for their Belt & Road global development programme.

One semi-official Chinese newspaper also floated the idea that China may be prepared to deploy a 35,000 strong peacekeeping force to Afghanistan to secure the country from avaricious neighbouring states. It sounds like a Trojan Horse gambit to me.

Afghanistan is, of course, land locked. It's nearest sea port is Gwadar in the Baloch region of Pakistan. The Chinese quietly arranged a 40-year lease on the port and the region's supporting assets.

These new realities on the ground probably played a role in the recent statement by former joint chiefs chairman, admiral Mike Mullen, who told Zakaria it's time for the US to break cleanly with Pakistan and leave Afghanistan to the Chinese. Mullen sees no purposeful role for the US in that region. Better it concentrate on building stronger ties with India.

In the circumstances, China does look like the most prominent suitor.

There was one exception, Owen. Ghengis Khan and his descendants conquered and held Afghanistan, just as they did China. Of course, Khan didn't worry about breaking a few eggs, and historians estimates the civilian casualties of his campaigns at between 4 and 60 million. Quite a feat so long before the days of air bombardment and mechanized warfare. Not sure if Xi had the stomach for that.

I did not recognize Thiessen"s name but I see that Cap has got him.

Thiessen seems to have the same high level of imperial derangement that we have been seeing in Washington for years now. It looks like ISIS-Khorasan, a sworn enemy of the Taliban, carried out the attack. Ergo, the Taliban is guilty of killing anywhere from 60 to 100 Afghans, including Taliban, and a few US soldiers. This is not a "terrible day" but just "business as usual" in Kabul or selected places in Syria and Iraq where ISIS and other terrorist groups are still in existence.

This is not Beruit or Dahran or Somalia or the USS Cole, etc. This is a canny move by ISIS-Khorasan to drive a wedge between the US and the Talbiban. Thiessen has responded like one of Pavlov's dogs.

The USA is to supply security? Is he totally crazy? At last report, the USA had 3,000 soldiers with no heavy weapons and who are not dug in packed inside as airport. Where is he going to get those security troops from and how is he getting them there? Fly them in from Qatar and toss them out of the plane so they can parachute in?

I guess Thiessen and the rest are unable to admit the Trump administration, the Pentagon, and State Departments totally messed up and the Biden admin continued in the same manner.

Of course, it is possible the Pentagon may have drafted comprehensive withdrawal plans after the Doha agreement, but given that they had successfully fought off withdrawal plans in Syria, Iraq and Afghanistan before, they probably did not bother. Of course, this appears to have been assisted by a complete failure of US military and civilian intelligence services. The upper echelons of both seem to have started to believe their own lies.

BTW, as a casual observer of the Afghan horror show, I was surprised that Kabul fell as quickly as it did. I was not expecting it until this weekend.

Whether in South America, Vietnam, or Afghanistan, the United States has consistently propped up corrupt regimes and paid the price every time, jrk. They do not learn from their mistakes.