A Long Way to Go 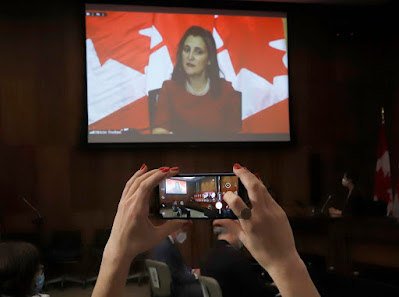 On Tuesday, Chrystia Freeland delivered a virtual fiscal update. That was a sign of the times. Heather Scoffield writes:

It was ominous and telling that Finance Minister Chrystia Freeland had to pull the plug at the last minute on the live delivery of her fiscal speech to the House of Commons on Tuesday and switch it to virtual.

Rapid testing had just indicated that two of her staff had tested positive for COVID-19, and suddenly the entire office, including the minister, had to take steps to isolate — but keep on doing their jobs by turning to all the workarounds we have developed over the past 21 months.

Freeland’s first post-election fiscal reveal is all about enabling that pattern economy-wide — dedicating billions to keeping the trains running on time despite the lightning speed at which Omicron is disrupting our lives.

The pandemic mantra for fiscal policy — “whatever it takes” — still stands. But its focus has shifted dramatically.

Stage 1 of the pandemic recession was locking down the economy, sending workers home and closing up shop so that we wouldn’t contaminate each other.

On paper, it looks like we have recovered. Employment is back, the economy is growing at a strong pace, and we’ve made up for lost time.

But things have changed. And COVID has come roaring back:

Canadians are cancelling their travel plans for Christmas, parents are scrambling to take days off from work to care for children exposed to the virus, financial markets are churning and global supply chains are gummed up.

But going back to a period of economic restrictions is not on Freeland’s menu right now, and senior officials said the main goal of fiscal policy right now is to hold on to what we have recovered — Omicron be damned.

That takes money, which is provided for amply in the fiscal update. Freeland had a windfall of about $38 billion extra this fiscal year compared to what she initially expected, thanks mainly to tax revenues bloated by inflation and some unused program supports. She spent $28 billion of that in last-minute measures, much of it on adapting to omnipresent Omicron.

In the name of helping individuals take contagion matters into their own hands, Freeland’s update puts $1.7 billion towards 180 million more rapid tests, and another $2 billion towards COVID-19 therapeutics and treatments. In the name of keeping buildings open to the public, the update has money for ventilation and air filtration in schools, community buildings and small businesses.

In the name of looking for solutions to supply chain disruptions, there’s $50 million for ports to open parking lots for their containers. And in the name of dealing with labour shortages exacerbated by the strange patterns of the reopening, there’s $85 million to speed up immigration.

And just in case, there’s a big, new $4.5-billion fund just for Omicron — to manage the border and keep the variant at bay, extra supports for businesses and individuals, extra health costs that may pop up.

After $300 billion of federal money already spent on keeping us safe from the pandemic, we are now supposed to know how to live with this thing and keep the economy running accordingly.

The large economic problems revealed in the latter days of the pandemic — inflation, affordability, labour shortages, and the potential for rising interest rates at a time of high personal and public indebtedness — were not part of Freeland’s fiscal update. Nor were the $78 billion in election promises that propelled the Liberals to a minority victory just a few months ago.

That was on purpose, Freeland told reporters watching her on a big screen from the room where her press conference was supposed to have been held.

There will be more to come in the budget. We've got a long way to go.

We've got a long way to go because Covid is far from done with us. Ontario's Science Advisory Table today advised that high-quality masks, physical distancing indoors, improved ventilation, and increased access to rapid testing can help buy time for boosters to take effect and keep schools open. What's the common element among those precautions? They're all collective action problems requiring government involvement.

So why isn't the Ford government arranging for N95 or KN95 masks for all Ontarians, like they do in Taiwan? Why aren't building codes being changed to improve ventilation? Why aren't rapid testing kits available for pickup at government offices like Service Canada, Service Ontario, libraries and post offices? It's time to budget for collective measures instead of constantly putting the onus on individuals to protect themselves and others.

For conservatives, Cap, collective action violates the first principle of modern conservatism -- the individual is king.