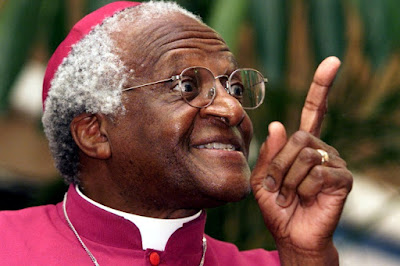 The moral authority of organized Christianity lies in tatters. With some of that religion's loudest adherents claiming that Donald Trump was anointed by God to re-order the world, who could find inspiration there? It was not always thus -- as the death of Desmond Tutu should remind us. South African journalist Redi Tlhabi writes:

To understand Archbishop Tutu, we must return to the dark period of South African apartheid. Fear and despair hung like an albatross around our necks. It was a time of unprecedented bloodshed. The townships, where Black people lived, were on fire and the police and army ruled the streets through the barrel of a gun, killing and maiming many.

That’s when a diminutive clergyman came into the scene. He walked through the streets of the burning townships, confronting the police, calming angry crowds, trying to quell the inferno with his authoritative voice. He spoke at mass funerals, condemning the apartheid state whilst risking his credibility among Black youth who were fired up and thirsty for revenge.

We live in what some have called "The Post Truth Era." For Tutu, Truth was everything:

Archbishop Tutu’s weapon of choice was the truth. He spoke it in all circumstances. He campaigned fiercely against apartheid and took his message to the world. This earned him the Nobel Prize in 1984.

His service to South Africa did not end with the fall of apartheid. He chaired the Truth and Reconciliation Commission. The TRC, despite its limitations, unearthed the atrocities of the past in shocking detail. Families got to hear how their loved ones were tortured and killed by apartheid’s machinery. It was raw and Tutu would often bow his head and weep during the hearings.

Some anti-apartheid activists became too comfortable once they reached power. Tutu was consistent and chastised the same African National Congress leaders he supported during apartheid. Their corruption and lack of accountability were anathema to him.

Former President Thabo Mbeki earned Tutu’s wrath for his denialism of the AIDS epidemic, which cost hundreds of thousands of lives, according to some estimates.

Tutu was coherent and demanded the same from all of us. There was no course too difficult or too dangerous. His quest for justice went beyond South Africa. The power of his moral clarity was undeniable. Mandela was correct when he said his voice “will always be the voice of the voiceless.”

To the core of his being, Tutu affirmed the lyrics of the Irish folksong, "All God's Creatures Got A Place In The Choir." He -- and his example -- will indeed be missed -- because he was the real thing.

The moral authority of organized Christianity lies in tatters. With some of that religion's loudest adherents claiming that Donald Trump was anointed by God to re-order the world, who could find inspiration there?

I'd say that this is more a peculiarly US Evangelical phenomenon and, quite frankly, a lot of those adherents are crooks, nutcases, or both. It's a little like a Muslim leader/head of state getting a firm endorsement from ISIS. Well, a Salafi anyway.

I have not heard the Archbishop of Canterbury, the Pope, the Moderator of the United Church of Canada, or the Patriarch of Russia endorsing him.

Tutu was indeed the real thing, Owen, someone who walked the talk and expected other leaders to do the same. He was as passionate in calling out apartheid in Israel-Palestine as he was in his own country. I'm surprised the WaPo obit you linked to mentions this so prominently; normally it's left out entirely. The oh so woke CBC, for example, ran two articles on Tutu's death, neither of them mentioning Israel, let alone putting Israel and apartheid in the same sentence. Of course, neither the WaPo nor the CBC mention Tutu's wholesale rejection of capitalism as a way of ordering society.

Just as Martin Luther King's legacy is a few uplifting snippets from his "I Have a Dream" speech, leaving out his criticism of the US war machine, racism and capitalism, Tutu's legacy will also be carefully curated. The powers that be don't care to hear the truth, and certainly not messages like this:

“If you are neutral in situations of injustice, you have chosen the side of the oppressor. If an elephant has its foot on the tail of a mouse and you say that you are neutral, the mouse will not appreciate your neutrality.” Desmond Tutu

A fair point, jrk. The real issue is whether or not people can recognize the real thing when they see or hear it.

It's always best to g to the source, Cap, not the edited or expurgated version of it.

The two giants to come out of South Africa and inspire the world were Tutu and Mandela. I wonder if it is even possible that someone else could come along to fill the chasmic void their deaths have left, Owen.

Owen, it can take a lifetime for crusaders like Tutu to be recognized as the honest, courageous people they were (or are). While we may not see anyone "in the wings" who could replace Tutu, that doesn't mean that other Tutus are not out there, possibly on their way to world-wide recognition as truth-tellers. I've been reading "Live in the City of Dirty Water" by Clayton Thomas-Muller, an indigenous, Canadian activist who has been working with thousands of indigenous peoples for indigenous and environmental justice around the world - including in South Africa. Just maybe...

Let's hope there out there, CD. By nature, they don't seek the spotlight. The spotlight finds them.