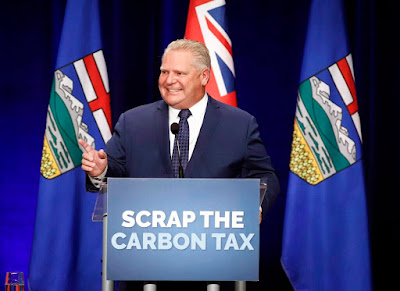 If you care about affordability, you should care about climate change. While Conservative politicians across Canada have done a very good job of maligning climate change mitigation as fundamentally unaffordable, the reality is, if we don’t act now on climate change, we’ll be dealt a much higher bill down the road.

The Financial Accountability Office has just released a report on the costs of climate change:

It’s important to note the report itself was limited to direct costs on public assets. Indirect costs — such as deaths, power outages, supply chain disruptions, or damage to privately owned buildings — were not covered. Additionally, the report only focused on three aspects of climate change: extreme heat, extreme rainfall, and freeze-thaw cycles.

In the nearer term, assuming a stable climate for the rest of this decade, we’re looking at a massive increase: “The FAO estimates that in the absence of adaptation, the cumulative cost of maintaining public buildings in a state of good repair will increase by about $6 billion relative to baseline spending in a stable climate over the remainder of this decade (2022-30).”

None of this is good news. It’s particularly grim once one considers that Doug Ford and the PCs haven’t just stalled on the climate file but have been actively hostile to meaningful action on climate change.

Ford has pitched himself as the taxpayer's friend. But the bill will come due when he's gone:

Ford basically built his political brand as being the definitive champion of the taxpayer. It’s all but certain that in the upcoming campaign, Ford and the Ontario PCs will once again claim to be the only party that respects taxpayers and their hard-earned dollars. However, without meaningful policies to help mitigate the worst impacts of climate change, the claim to be looking out for taxpayers falls apart.

On the climate file, it's always been a case of "Pay me now or pay me later." Doug Ford prefers to let others pay the bill -- and the bill will be staggering.

Leaving out the indirect costs, such as power outages and damage to private buildings, is a huge omission. Take those recent floods in BC. Most insurance policies don't cover overland flooding, so the government becomes the insurer of last resort. People will look to governments for help and if they don't get it they'll remember that at the polls. Ford better hope to avoid a climate disaster before the next election.

It's like standing on an Indonesian beach and wondering where the water suddenly went. Then the tsunami shows up and you have to run for your life - if you haven't left it too late to escape.

Like it or not, we're already becoming overtaken by events, some of which were easily foreseeable.

We might argue that political leaders of 30 years ago didn't know any better. Their failure amounted to an act of omission. That excuse is no longer available. Ford is selling out the future because he's sure he won't be punished for it at the polls. I guess we get what we deserve.

If he's re-elected, Cap, he's sure to encounter one.

We knew who Doug was before we put him in office, Mound. That doesn't say much for our collective judgment.