Not A Government In Waiting 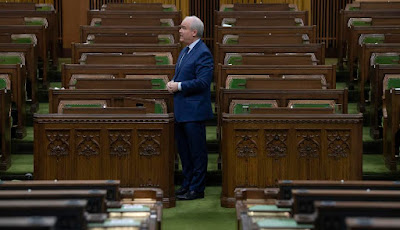 The Conservative caucus is not a collection of happy campers. Althia Raj writes:

The brewing tensions of the past three months, since the Conservatives’ disappointing election loss, came to a head last Wednesday in what one MP described as a “bloodbath.”

The blood spilled on the caucus floor belonged to party Leader Erin O’Toole, the MP offered in vivid detail. It was the culmination of weeks of frustration, anger, lies, betrayal, shifting alliances, scheming and plotting that have come to characterize the human drama behind the scenes between O’Toole and his caucus.

During the Tories’ last meeting, public dissenters were labelled “cowards” for airing their opposition to Quebec’s Bill 21 over social media. Social Conservatives, upset they’d taken one for the team on the Liberals’ conversion therapy ban, known as C-4, were livid that Red Tory colleagues were publicly celebrating the move, suggesting their views promoted hate and fear.

The Conservatives have adopted the Republican model of grievance politics. But it's the grievances against each other that are tearing them apart:

In October, Conservative MPs adopted the Reform Act, giving themselves the power to call for a caucus leadership review or to expel caucus members. As long as 24 members requested it, a secret-ballot majority vote can boot the leader or a caucus member.

On. Nov. 16, the CBC cited “senior Conservative sources” saying 24 MPs had pledged to sign a letter requesting the removal of a colleague.

O’Toole had already appointed 78 MPs — of 118 — to his shadow cabinet. He packed his team with new MPs, those ideologically aligned and even some old allies who’d backed Peter MacKay during the last leadership contest over concerns O’Toole lacked the right leadership skills.

Now, O’Toole was suggesting he had the numbers to oust anyone.

Whether that’s true or not is unclear. But sitting as an Independent would likely doom an MP’s chances of re-election.

It was a period of fear, anxiety. People watched their backs.

This is not a government in waiting.

Party members pulling in all different directions, expulsions for doing what the party voted to allow, name calling and backbiting - all signs of poor leadership. This will get worse until the Cons grasp the nettle and uproot O'Toole. OTOH, letting him stay on until 2023 is fine by me.

Regardless of their leader, Cap, the Conservatives continue to live in a world that died some time ago.

Are the Tories channeling the ghost of Dalton Camp?

This sort of fighting makes the Liberals orgasmic. Think of the Reform-PC wars that handed Chretien three consecutive majorities.

The Conservatives have their own Tea Party caucus, Mound. And they're determined to be in charge.

Imagine stumbling around in a darkened room, trying to feel your way around but being psychologically resistant to acknowledging what the sensations you're experiencing mean.

Your hand touches something that feels like a wall, but for some reason you decide there's empty space ahead of you and stride confidently forward.

That's where we all are to some respect. But the Conservatives are the most belligerent when it comes to denying reality. COVID is real. Global Warming is real. The failure of neo-liberalism is real. But these idiots refuse to acknowledge these realities and therein lies their problem.

Precisely, thwap. I can add nothing more to your conclusion.