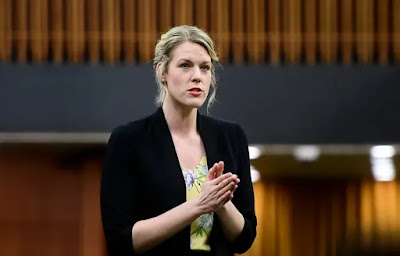 Canadians have been horrified by American politicians like Lauren Boebert and Marjorie Taylor Greene proudly spouting unadulterated stupidity. Now one of our own has taken to Facebook to prove the truth of Mark Twain's admonition that it is better to have people think you're stupid than to open your mouth and remove all doubt. Ian Bailey and Marieke Walsh write in The Globe and Mail:

An Alberta Conservative MP posted false information about vaccines and their efficacy as she defended people who choose not to be vaccinated and said they’re being “demonized.”

Rachael Thomas, the member of Parliament for Lethbridge, made the comments in a video posted to Facebook on Dec. 16, which is still online. In the post she makes claims that are not backed by readily available information from public-health agencies.

About the unvaccinated, Ms. Thomas said, “They are being portrayed as evil, as if they are deserving of the contempt that we have for them, as if they should be the ones that are blamed or used as the scapegoat for the fact that life isn’t normal right now.”

In the video, Ms. Harder says there are more vaccinated people in hospital than unvaccinated people. That’s not correct according to the latest data from Alberta Health Services, which show that 62 per cent of people hospitalized are unvaccinated.

American insanity has crossed the border. We have our own nutbars.

Owen, I think we've always had our own nutbars, the pandemic has shown us they are friends, family members and colleagues. Their propensity to believe nonsense made them a perfect target for the well funded and growing, anti vaccination/anti science movement and thus has assured us of at least another couple of years of back and forth waves, restrictions and grave health outcomes due to delayed surgeries and cancer treatments, not to mention the dreadful long covid. To find them in politics too, comes as no surprise at all. In Canada, we're fortunate, at least at present, that our majority is much bigger and we pay them less attention. In the US by contrast, Marjorie Taylor whatever, grabs headlines and ratings and makes a ton of money, same with the rogue senators who are tanking the president's (the President!!) agenda. BC Waterboy

The anti-vax movement is a pandemic in itself, waterboy. Let's hope we can contain it -- because, essentially, it's a culture of death.

I just had a look at her wiki page. It may not be totally impartial. In particular I am doubtful about the "walks on water" claim ...as the Chair of the Standing Committee on Access to Information, Privacy and Ethics... she acted as an impartial mediator and led the committee through discussions on the WE Charity investigation. claim. I remember that more as a combination gong-show and witch hunt.

Every party can land the occasional nutcase but the CPC seems to be good at it. I still miss Myron Thompson. Derek Sloan is not a loss though I hear he has started the new "Ontario Party".

It's disturbing that so many nutcases have found a home in the Conservative Party, jrk.

Ms. Thomas is quite right that the unvaccinated are being portrayed as evil, as if they were deserving of contempt. This is also true of other people whose poor decisions create threats to public safety, such as dangerous or drunk drivers. Indeed, we fine speeders and jail dangerous and drunken drivers, so the unvaccinated are getting off lightly. There is no right to endanger the public, regardless of whatever "good reasons" you claim to have.

Fringe minds have always been drawn to the party of Preston and Sideshow Steve as moths are drawn to a burning Coleman lamp on a picnic table.

Preston and Steve would claim that their followers are bright folks, Mound. By their words shall ye know them.

All of this is certainly incredulous. Let’s not drive such jibberish…a good old. nNewfoundland word….underground where we do not know where it is located. Anyong

Jibberish should be in the open, Anyong -- where we can judge the minds behind it.