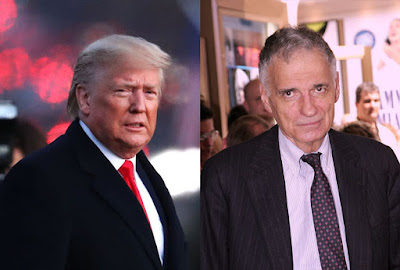 The outline for a fascist takeover in the United States is clear for all to see. Ralph Nader writes:

Getting ready for 2024, the Georgia GOP legislature has stripped the election-certifying Secretary of State, Brad Raffensperger, of his authority to oversee future election certifications. The legislature has also given itself the unbridled authority to fire county election officials. With Trump howling his lies and backing his minion candidates, they created a climate that is intimidating scores of terrified election-precinct volunteers to quit.

Added to this are GOP-passed voter suppression laws and selectively drawn election districts that discriminate against minorities – both before the vote (purges, arbitrary disqualifications), during the vote (diminishing absentee voting, and narrowing dates for their delivery), and after the election in miscounting and falsely declaring fraud.

Add to these measures a simple lever that has now been put in place:

The ultimate lethal blow to democratic elections, should the GOP lose, is simply to have the partisan GOP majority legislators benefiting from demonically-drawn gerrymandered electoral districts, declare by fiat the elections a fraud, and replace the Democratic Party’s voter chosen electors with GOP chosen electors in the legislature.

There are several institutions and people who could do something about all of this. But they are not acting:

All that is going on to deal with Trump’s abuses in any focused way on Capitol Hill, controlled by Democrats, is the House’s January 6th investigation. So far as is known, this Select Committee is NOT going to subpoena the star witnesses – Donald Trump and Mike Pence. So far, the Congress is feeble, not a Rock of Gibraltar thwarting the Trumpian dictators.

It’s Trump’s Supreme Court and his nominees fill many chairs in the federal circuit courts of appeals. The federal judiciary – historically the last resort for constitutional justice – is now lost to such causes.

The Dems do moan and groan well. But where is their big-time ground game for getting out the non-voters in the swing states? Are they provoking recall campaigns of despotic GOP state legislators in GOP states having such citizen-voter power? Why aren’t they adopting the litigation arguments of Harvard Law School’s constitutional expert, Professor Larry Tribe? Where are their messages to appeal to the majority of eligible American voters who believe that the majority rules in elections? Why aren’t they urgently reminding voters of the crimes and other criminogenic behavior by the well-funded Trump and his political terrorists?

What about the legal profession?

Aren’t they supposed to represent the rule of law, protect the integrity of elections, and insist on peaceful transitions of power? They are after all, not just private citizens; they are “officers of the court.” Forget it. There are few exceptions, but don’t expect the American Bar Association and its state bar counterparts to be the sentinels and watchdogs against sinister coup d’états under cover of delusional strongarming ideologies.

And look at what's not happening on campuses:

Weren’t they the hotbeds of action against past illegal wars and violations of civil rights in the Sixties and Seventies? Sure. But that was before the Draft was eliminated, before the non-stop gazing at screens, and before the focus on identity politics absorbed the energy that fueled mobilizations about fundamental pursuits of peace, justice, and equality.

Taken all together, it's not very encouraging. Bad things happen when good people do nothing.

Yes, yes, and yes. But this coming from Nader is rich (and offensive).

G.W. Bush anyone, and the war of aggression in Iraq, enabled by Nader's pox on all their houses 3rd party run. Sure, the Dems go into Afganistan, but never Iraq unprovoked and without evidence.

I loved early Nader. But he can piss off and take his pot with him.

It's wasted energy on the GOPs part, they will destroy democrats who have nothing to offer, but more rightwing neoliberalism and "leftwing" ultra wokeness. Even many racial minorities will abandon them.

If it wasn't for Nader, Al Gore would have been president, Brian. Still, Nader knows corruption when he sees it.

And that would be very unfortunate, Gyor -- because there is much more at stake than the traditional rivalries between the two parties.

Owen
our American friends told us many times that whoever revealed evidence of Trump's criminal behaviour ended up dead or in gaol. I do hope you are taking sensible precautions.

I do have the good fortune of living in Canada, hels. Unfortunately, as COVID has proved, millions of Americans don't have such luck.