Somewhere There Is Light 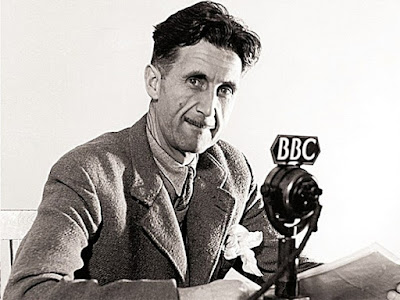 Rebecca Solnit's new book is titled Orwell's Roses. Dorothy Woodend writes that it is a book for our times:

If you need some prickly bits of hope and thorny rationality in these times, George Orwell is your man. The English author of such seminal texts as 1984, Animal Farm and Homage to Catalonia is the subject of American writer Rebecca Solnit’s new book, Orwell’s Roses.

The essay collection, conjoined loosely by Orwell’s life and work, is delicate and perambulating, but also studded with bedrock ideas, emerging like boulders out of deep research and analysis. One moment you’re bobbing along with Solnit’s graceful prose; the next you run face first into a sentence so adamantine in its acuity, that it literally takes your breath away.

It’s a bit akin to getting hit in the head by a rock, but in a good way. You come away feeling stunned, but also profoundly impacted.

The bogeyman of Orwell's time was Joseph Stalin -- who Orwell understood thoroughly:

A great many people believed (and some still do) that Stalin was a fine fellow, when all evidence to the contrary, like millions of dead Russians, indicates otherwise. Even those who knew better looked away from the truth of his rule. Solnit cites playwright George Bernard Shaw and news writer Walter Duranty as Stalin fans and apologists, but there were plenty of western journalists, writers and artists who also capitulated to the Soviet fantasy.

These days, all kinds of people who know better lick Donald Trump's boots. Stalin had a vast coterie of bootlickers -- like Trofim Lysenko:

Lysenko, a bootlicker and master dissembler, told Stalin exactly what he wanted to hear, namely that it was possible to increase crops yields with hardier strains of wheat almost overnight. The end result of his fiction was the death of millions of people. Whereas [Nikolai] Vavilov, who had dedicated his entire career to finding ways of better feeding the world, told the truth and died of starvation in a gulag.

What's the lesson behind all of this?

The lessons of history don’t always pertain exactly, but at best they can remind one that whatever else happens, change is the one constant. Empires rise, empires fall. But before the light returns again, we’re in for a whole lot of suffering.

Still, even in the darkest of timelines, there are things to be treasured, savoured and celebrated. Solnit’s writing is one of those things. Like Orwell, her work shines with the clear light of reason and humanity, reminding readers that this too shall pass, even if it feels like the madness is permanent.

Buckle up. It's going to get darker. But -- somewhere -- there is light.

Thanks for this, Owen. I often think of Orwell in our troubled times, and because of your post, I just put the book on hold at my library.

I was speaking with a friend this morning about the confluence of so many looming challenges at the very moment we, or at least the western world, have such degraded leadership. There are no Pierre Trudeaus, no Mike Pearsons, no Bob Stanfields or John Diefenbakers today and none waiting in the wings. The A-list talent want no part of politics.

Australia has Morrison. We have Justin. The US may soon have Trump back and, in any case, a Congress intent on leaving the country a sitting duck. The Brits have Boris Johnson. At times it feels like there's no one in the wheelhouse.

Where are we to find leaders who can prepare us for the worsening impacts of climate breakdown or reverse inequality while there's still time or guide us through the end of growth and globalism or restore progressive democracy? We haven't had that quality of leadership for decades and look where it has delivered us.

Orwell was A Man For All Seasons, Lorne -- another work of literature that I loved to teach.

More and more I take issue with certain words, terms, phrasing.. and so I won’t or don’t accept their use. Examples ? ‘Leaders’ - Is Jagmeet Singh a ‘Leader’ only because he & his enablers sold more retail Party memberships than any other NDP candidate ? One can ‘lead’ a group nowhere.. and be a ‘Leader’ ? Semantics of course.. but..

If 97% of ‘Canada’s Vast Oil Reserves’ are Bitumen in the Tar Sands, and Canada’s ‘conventional oil’ is about tapped out, aside from offshore Newfoundland / Labrador wells.. how can a synthetic slurry approx 33% highly refined condensate & 67% high sulphur granular Bitumen be ‘Ethical Oil’ ? Whether extracted via forced steam in situ or gouged from the earth

We expect ‘Classroom Leadership’ from Educators for students in our Educational Systems
We expect Leadership from an entire Operating Team during Open Heart Surgery, indeed all the way up to Chief of Surgery and on to the Head of Departments or the entire Hospital.. such roles are ‘earned’ not elected

I have many other examples.. especially obvious via lazy cut n paste Mainstream Media ‘Journalism’.. haha
W Eugene Smith was an incredible Photo-Journalist and astonishingly courageous Humanist - I became a reasonably well regarded Freelance Photographer and documentary artist.. these are two completely different levels of accomplishment.. any comparison is laughable.. again, there’s semantics.. but words, terms, meanings are critical in my view

FYI - again experiencing fatal issues when posting to Mound or Lorne.. it’s hit and miss, so I copy and paste to email so they don’t vaporize into the black hole without a trace.. and can try again.. seems an issue re Google Account sign in
I’m now using Ipad 4th Generation with OS 15.. Your blog currently ID’s me as Salamander, whereas others see me only as Google Account.. a bit baffling !

I don't understand how this new technology is affecting your responses, sal. But I'm very happy you're still getting through.