The Rich Are Massively Richer 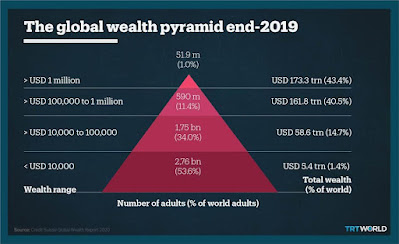 Here's some depressing news this Christmas. A new report documents that the rich are getting massively richer. Jake Johnson reports that:

In the nearly three decades since 1995, members of the global 1% have captured 38% of all new wealth while the poorest half of humanity has benefited from just 2%, a finding that spotlights the stark and worsening gulf between the very rich and everyone else.

That’s according to the latest iteration of the World Inequality Report, an exhaustive summary of worldwide income and wealth data that shows inequities in wealth and income are “about as great today as they were at the peak of Western imperialism in the early 20th century.”

The pandemic has made things worse:

“The Covid crisis has exacerbated inequalities between the very wealthy and the rest of the population,” said Lucas Chancel, co-director of the World Inequality Lab and lead author of the new report. “Yet, in rich countries, government intervention prevented a massive rise in poverty—this was not the case in poor countries. This shows the importance of social states in the fight against poverty.”

“Indeed, the share of income presently captured by the poorest half of the world’s people is about half what it was in 1820, before the great divergence between Western countries and their colonies,” the report notes. “In other words, there is still a long way to go to undo the global economic inequalities inherited from the very unequal organization of world production between the mid-19th and mid-20th centuries.”

Not exactly progress, is it? Ho! Ho! Ho!

As US Supreme Court Justice Louis Brandeis said, "We can have democracy in this country, or we can have great wealth concentrated in the hands of a few, but we can't have both."

We know what needs to be done: trust busting, regulation and tax increases. Doing it is another matter and the rich never willingly give up an advantage.

We need another Franklin Roosevelt, Cap -- someone willing to take on what he called "the economic royalists."

As Anonymous said, "...the rich never give up an advantage". If the poor cannot be helped by governments that are controlled by the rich (which I believe they are - that's why the rich nearly always have done as well as they do), then what possible options are available to the poor if they are to survive? Crime? Civil disobedience? Morally justifiable violence? Clearly, if those sorts of damaging reactions are to be avoided, then our elected governments must take a stand now on behalf of the poor, not the wealthy. Control of housing costs would be a good start...

Several years ago I read a piece by a union economist from the US. He warned that the extremely wealthy had decided they no longer wanted to control the government. They wanted to own it. The capture of the Supreme Court cements their success.

I have long suspected that the deeply divisions in the American population were carefully engineered to leave society, blue and white collar working America, weakened, sometimes powerless. This has certainly enabled the massive transfer of unearned wealth out of the pockets of working class America and into the offshore accounts of their new masters.

At one time ordinary Americans were accused of waging a "class war." Warren Buffet refuted that, saying that the class war was over before regular Americans caught on and his class won.

In your reference to F.D.R. Owen ,I include this.
https://www.presidency.ucsb.edu/documents/message-congress-tax-revision

Taking a stand for the poor would mean changing how we fund elections, CD. As it stands now, the rich can buy the political party they prefer.

Buffet has always understood how wealth has affected American politics, Mound. And he has never minced words on the subject.

Wealth in the modern world does not come merely from individual effort; it results from a combination of individual effort and of the manifold uses to which the community puts that effort. The individual does not create the product of his industry with his own hands; he utilizes the many processes and forces of mass production to meet the demands of a national and international market.

Thanks for the link.