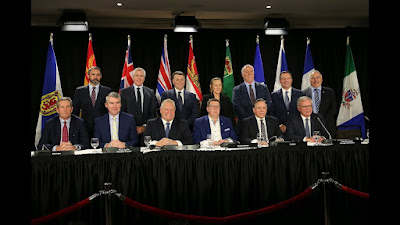 Sometimes opponents come together for a common cause. Robin Sears writes:

In the spring of 1940, facing rapidly darkening clouds of war, Winston Churchill reached out quietly to Clement Attlee, a lifelong opponent, to join a new unity government along with some of his senior colleagues. Attlee’s agreement helped Britain win the war.

And sometimes they blow the opportunity:

Four decades later, Pierre Trudeau, facing a deepening recession, skyrocketing energy prices and rising tensions with both Quebec and the West, reached out to Ed Broadbent and asked him whether he and some colleagues would consider joining a government. Broadbent demurred, knowing that the enmity toward Trudeau Sr. on issues like wage and price controls was too deep to fly. Trudeau then stumbled into the disastrous National Energy Program alone.

We have reached another pivotal moment:

Canada is facing a pandemic, a climate crisis and looming battles with the provinces — most divisively, perhaps, on health care. We have a new minority government — never good at cross-partisan, let alone federal/provincial dialogue — strutting as a majority government once more.

The Council of the Federation (COF), the club of provinces and territories, has been signalling to Ottawa that they are increasingly united and more willing to work out a deal on health-care funding. As always, the negotiation will focus on the two knottiest issues: how much, and for what?

If Quebec were to be less vocal in its perennial demand to “just sign the bloody cheque and shut up,” it would give the premiers the chance to find bridges to agreement on “conditionality” and on how much, putting Ottawa in a difficult place. The “strings attached” health-care funding demand from Justin Trudeau’s government is a little insulting. Insisting on specific guarantees, like mental health-care funding only going to programs they approve, implies the premiers are a collection of irresponsible spendthrift teenagers.

If Ottawa said “we would like to tell Canadians what you think you most need funding for,” the premiers’ answer might sound more like “we have these six issues at the top of our needs list, and together we will prioritize any new money toward them.” Instead, Ottawa’s arrogance understandably gets a raised finger.

There may be several premiers who would consider some form of performance assessment about how well they do health care. There have been discussions among experts about an existing national health study institution, such as the Canadian Institute for Health Information, or a new one created for the purpose, doing annual assessments of goals and targets achieved. If agreed on by the COF, this would be a gift for Ottawa to seize. But it would need a quid pro quo.

The greatest noise is always made about the cost, but it is the far easier issue to resolve. Federal Liberals have always governed as if spending was never a real concern for their favourite projects. After this spendthrift 20 months, how could they credibly cry poor about the future of health care? It would do the standing of a somewhat enfeebled prime minister no end of good to deliver a transformational change in federal/provincial health-care management.

Will our political leaders recognize the moment and seize it? Stay tuned.

Did I notm read a little while ago that Doug Ford's Ontario Gov't has stashed ~1 billion Covid-19 funds presumably to let them show a lower budget? I'd say get any agreement with the provinces signed in blood.

Premiers have taken so called health care funds and spent them on other programmes in the past. It's hard to build trust when you lie . I want the part of my taxes marked for healthcare to go to healthcare: not to some provincial politician's vanity project.

The negotiations won't be easy, jrk. They never are.

As I wrote to jrk, rumley, getting there won't be easy. It will take a lot of good faith -- something which is in short supply.