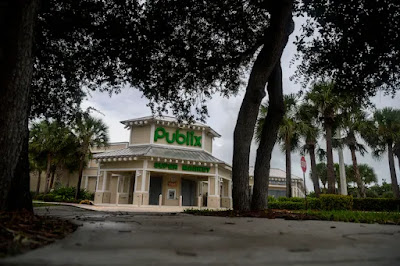 We're beginning to get some idea where the money to finance the Trump insurrection came from. The Washington Post reports:

Eight days before the Jan. 6 rally in Washington, a little-known Trump donor living thousands of miles away in the Tuscan countryside quietly wired a total of $650,000 to three organizations that helped stage and promote the event.

The lack of fanfare was typical of Julie Fancelli, the 72-year-old daughter of the founder of the Publix grocery store chain. Even as she has given millions to charity through a family foundation, Fancelli has lived a private life, splitting time between her homes in Florida and Italy, and doting on her grandchildren, according to family members and friends.

The Washington Post previously reported that on Dec. 29, 2020, Fancelli donated $300,000 to Women for America First, a nonprofit group that helped organize the Jan. 6 rally, and $150,000 to the nonprofit arm of the Republican Attorneys General Association, which paid for a robocall touting a march to “call on Congress to stop the steal.”

On the same day, Fancelli gave $200,000 to State Tea Party Express, according to Sal Russo, a top consultant to the conservative group. Russo told The Post last week that he gave the House committee records of Fancelli’s donation, which he said was used for radio ads and social media urging supporters of President Donald Trump to attend the rally and subsequent march. He condemned the violence at the Capitol.

Fancelli is their heir to the Publix fortune:

Her family’s fortune comes from the fast-growing Publix supermarket chain, which has tried to distance itself from Fancelli’s involvement in the rally. Based in her hometown of Lakeland, Fla., Publix touts its reputation for customer service with a decades-old “where shopping is a pleasure” slogan.

After an initial report a few weeks after the rally that Fancelli had donated about $300,000, Publix released a statement saying that she was not involved in the business and that it could not comment on her actions. Last week, after The Post inquired about Fancelli’s contributions totaling $650,000, the company went further, saying it “cannot control the actions of individual stockholders” and issued an unusual rebuke of a member of the founder’s family. Because the company is privately held, Fancelli’s stake — if any — is not a matter of public record.

“We are deeply troubled by Ms. Fancelli’s involvement in the events that led to the tragic attack on the Capitol on January 6,” Publix said in a statement to The Post.

Just a little old lady living in Italy -- and an easy mark.

This was no little old lady conned out of her life savings. This was a plutocrat using her money to support a fascist coup.

FEC filings show that Fancelli donated more than $2.6 million to the Trump Republicans in 2019 and 2020. For obvious reasons, Publix wants to distance themselves from the scandal. But Fancilli was president of Publix Super Markets until at least 2019, a time when she was splurging on Trump causes. So the company can't claim to have clean hands.

Business leaders financed the rise of fascism in the last century. They like fascism. If I were living in the States, I'd boycott Publix regardless of the spin they put out.

If you're wealthy, Cap, fascism will make you wealthier.

"Fancelli was abetted in fundraising the event by Alex Jones, a far-right political commentator who for over two decades utilized his web show InfoWars to pervade his rhetoric throughout the far-right echo chamber. Jones previously hailed Fancelli as the rally’s seemingly anonymous angel investor, stating on the day of the event, “Thank God a donor came in and paid like 80% of it, because it cost close to half a million dollars."'

"The argument that Fancelli’s involvement with Trumpworld does not “represent the company in any way” while a substantial defense, in this case, seems precarious when held against the backdrop of Publix’s continued relationship donating to candidates with ties to the National Rifle Association.

"The chain’s relationship with the NRA became so apparent that, in 2018, David Hogg and other demonstrators from March for Our Lives held “die-ins” at Publix stores during which they laid in aisles in silent protest, calling on the company to cease their funding for NRA candidates in the wake of the mass shooting at Marjory Stoneman Douglas High School in Parkland, Florida."

Thanks for the expanded context, Mound. It seems that Fancelli is ignorant about many things. But she knew with whom she was dealing.

I think I'd disagree with the "ignorant" assertion. From Cap's link and TDL points I'd say seems as "ignorant" as Charles Koch or Rupert Murdoch. Of course one could argue that both of these men are profoundly ignorant.

A person can be both ignorant and powerful, jrk. In fact, you could argue that ignorance and power attract each other.

The former Attorney General in Australia's Federal Government said he did not know who funded his personal court case because the money came from a blind trust. I am glad he lost his ministry, even though the money was infinitely smaller than the money flowing into Trump's coffers.

If Trump were in Australia, hels, he would have been held to account long ago.