Trumpism Is Here To Stay 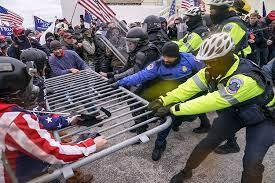 If you were hoping that Donald Trump would go gently into that good night, take a look at a column written by Ron Filipkowski in The Washington Post:

No one can draw a straight line from Trump’s tweet to the storming of the U.S. Capitol, but the events of Jan. 6 were born on social media — which makes it a good place to discover what the activists, influencers and organizers of the MAGA movement are up to on the ground. Then, they were charting a course to “stop the steal” on a national stage. Now, they have taken their disparate causes and motives to the local level, refocusing on softer, more vulnerable targets such as local government agencies, because, according to the new motto of one of their ubiquitous leaders, former Trump national security adviser Michael Flynn, “Local action has a national impact.”

These people are mad as hell and they're very dangerous:

My background, combined with the research skills of my team, has allowed us to monitor and track right-wing groups across a wide array of platforms. We watch obscure live­stream events and listen to podcasts and radio broadcasts, and I have attended events in person. We follow influencers and organizations wherever they are on social media — Facebook, Twitter, Parler, Gab, Telegram, YouTube, Gettr, Rumble, Frank Speech and other, darker places.

What we’re seeing is that many of the activists and influencers who promoted and attended the rally that became the violent attempt to stop the certification of President Biden’s election have now turned their attention to three primary targets: school boards, city and county commissions, and secretaries of state and supervisors of elections. The new endeavors give the appearance of grass-roots efforts but feature familiar characters teaming up with organizations long involved with financing and leading disruptions, protests and disinformation campaigns on a variety of issues — organizations like Morton Blackwell’s Leadership Institute, the Council for National Policy, Turning Point USA, the Heritage Foundation’s Action branch and Liberty Counsel. What’s more, some of these activists have harnessed the anger, fear and resentment they have helped churn up and are using it for their personal and financial benefit. We began noticing this shift between February and March, as these leaders launched new websites, created new business entities, and restarted their events and rallies.

There is big money in hate. Donald Trump personifies that fact. And the fate of a nation hangs in the balance.

Email ThisBlogThis!Share to TwitterShare to FacebookShare to Pinterest
Labels: The Trump Mob

When the ringleader aren't prosecuted, they get the idea they're above the law and will redouble their efforts. It's almost a year since Jan 6. The DOJ has had ample time to gather evidence. The lack of high-level criminal prosecutions is a clear signal that the Biden administration will not fight.

I'm assuming this is from you, Cap. And you're right. Unless there is a strong counter-response, it will only encourage more of the same very dangerous behaviour.

Yeah, that's me, Owen. Garland's DOJ has brought no indictments against Trump administration officials. (Bannon was a private citizen leading up to Jan 6 and was indicted on contempt charges stemming from the House investigation, not anything the DOJ/FBI initiated.)

Compare that to the Watergate record and remember that the DOJ was under a Republican president:

Or the DOJ's Iran-Contra record:

Garland's record to date is a sad joke.

Things will only improve, Cap, if a number of Trump's people -- including the Orange One himself -- go to jail.