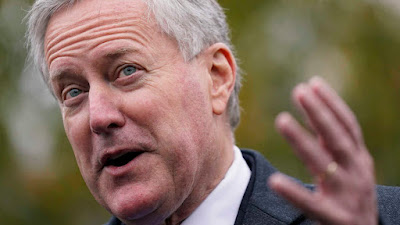 Multiple pieces of evidence have emerged pointing to a deliberate effort to overthrow our democracy. And it is former White House chief of staff Mark Meadows who is key to piecing them all together.

Start with the two memos from John Eastman, President Donald Trump’s lawyer, who sketched out a plan for Vice President Mike Pence to block Joe Biden from assuming the presidency. After making false accusations of election fraud, Eastman suggested Pence could simply refuse to accept electoral college votes when Congress met on Jan. 6 to certify the results, making Trump the “winner” or throwing it to the House where Republicans on a unit vote (one per each state delegation) might have crowned Trump president.

Two additional memos from Trump campaign counsel Jenna Ellis, one on Dec. 31 and one on Jan. 5, have also surfaced. Politico reports: “In the Jan. 5 memo, Ellis argued that key provisions of the Electoral Count Act — limiting Pence’s authority to affirm or reject certain electors — were likely unconstitutional. She concluded that Pence, while presiding over lawmakers’ counting of electors, should simply halt the process when their alphabetical proceeding reached Arizona.” This, of course, would be patently illegal. (Has her state bar been contacted?)

And now we learn of a particular PowerPoint presentation:

And we have seen the mind-boggling 38-page PowerPoint plan to conduct a coup, including a declaration of “national security emergency” that could halt the voting, if needed. As bizarre as the document was, even more bizarre are the alleged meetings that Meadows and lawmakers had with the plan’s author, none of whom had the common sense and loyalty to report it to the FBI.

This is about more than a criminal case. It is about a well-organized coup:

Given the number of people involved in the coup attempt and how perilously close we came to constitutional disaster, the scheme amounts to the most astounding political story in our lifetimes (or perhaps in history).

That those involved in the plot might return to power is unimaginable; that the GOP continues to embrace Trump is shameful. If we cannot collectively recognize that threat to the republic, then, to Benjamin Franklin’s disappointment, we cannot keep it.

From the beginning, Americans were warned that their democracy was fragile. The information the committee keeps uncovering proves just how fragile it is.

Where's the FBI in all this? The House committee can subpoena Meadows and vote him in contempt, but that leads to a dead end if he decides not to cooperate. Given the evidence of a massive coup conspiracy, why isn't the FBI raiding offices, seizing phones, computers and records and arresting the ringleaders? They should have been doing that 11 months ago - this coup attempt was carried live on TV! There's no secret about the participants, their public actions condemn them. Round them up and put them on trial and let the chips fall where they may. It's the only way to return the country to some semblance of democratic order.

Haldeman was jailed as a result of an FBI investigation that Nixon wanted the CIA to stop. Note that this FBI investigation took place while Nixon was president. Half a century later, the idea of the FBI investigating senior administration officials is unthinkable. Look how far the rot has pervaded.

And members of Nixon's own party helped to bring him down, Cap. The rot is pervasive.

.. There should be little or no ‘surprise factor.. Other than any sane observer astonished that the ‘coup’ participants dreamed they were in a historic fantasy adventure land bubble without real life consequences

This Canadian observer wonders if the niceties & legal protocols unfolding are actually coddling or buffering the deranged participants (at all levels) from bottom line reality.. ie as in Monopoly ‘Go Directly To Jail & Do Not Pass GO !

Like what did they actually think the outcome & real consequences would mean ? That the Nation would look upon them ‘As Heroes, Just For One Day’ (David Bowie & Brian Eno) or Leaders of A Brave New Trump World Order ? The bar on ‘Losing The Plot’ was raised ‘For Just One Day plus Evermore’ methinks ..

The USA has ‘Boomers’, Strategic Bombers, ICBM’s, Harpoon Missiles, Tactical Nukes, Earth Orbit Weaponry, Chain of Command & boots on the ground in 72 countries.. but a takeover of The Nations Capital by a riffraff horde would be just fine n dandy eh ! No Harm No Foul & kumbaya in The Land Of The Free & The Home Of The Brave

And some people are still claiming that they were "just tourists," sal.

Usually the arrival of dark and dangerous times draws political adversaries together. Not this time. Circling the drain ever faster.

They're willing to tear it all down, Mound. Egos on a rampage.

If Biden can't control Manchin then he doesn't deserve to stay one more day in the White House. Dems have to fight dirty like the Repugs but Biden doesn't want too. And if the Dems think they can keep the WH with a Black Woman good luck on that!

The Republicans respect neither laws nor norms, Ben. They will win at any cost -- even if it means burning the house down.

Maybe that is what has to happen. The house needs to burn. Anyong

Adding to the above , the Disaffected Lib’s blog this morning, do any of you think or have what it takes to call the USA exactly what it is? For the most part a country built upon corruption and lawlessness and mostly radical with mental illness to boot? While many Canadians want to be like them; do any of you think that country could not March in here and declare Canada theirs? Do the Americans ever think about what the word “Cooperation means and for that matter do many Canadians? These people are sick, as sick as loons. Anyong

There will be utter gun fuelled chaos if that's what happens, Anyong.

It's a sickness that runs deep, Anyong.

@ thd salamander
but a takeover of The Nations Capital by a riffraff horde would be just fine n dandy eh !

Of course it would. Given it was Trump's merry band of incompetents that tried to pull this off, the whole thing probably would have collapsed within days but it might have been chaos for a while. I believe there have been coups that worked given similar situations. Besides, most of the "riffraff horde" were just stooges there for protective colouring.

More cynically:
The reason the coup attempt failed was because there was no US embassy is Washington. (I cannot remember where I saw this.)

What is frightening, jrk is that they're planning to do it again.

Owen, in 2016 the Democrats in the House failed to certified President Trumps election. In 2000 Al Gore refused to accept the results of the election and he took it all the way to the Supreme Court. Unfortunately, both parties have a bad history of not accepting election results.

Both parties need to learn if you are pointing your finger at someone else you have 3 fingers pointing at yourself.

Unfortunately, Jack, I don't think the situation will improve.