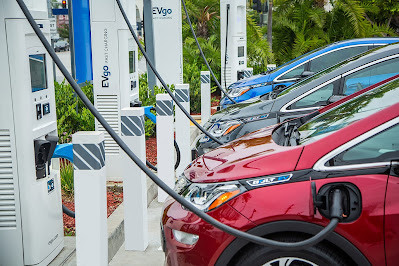 Shortly after coming to power in 2018, Ford's government scrapped Ontario's cap-and-trade system, and with it the electric vehicle rebates funded by that program.

He also stopped building charging stations — the provincial transit agency even removed some — and dropped a requirement for new homes to include the wiring for potential EV chargers.

Ford at the time decried the rebates of up to $14,000 as subsidizing purchases for wealthy buyers — and he still does, mostly.

In the year after the rebate cancellations, the market for electric vehicles tanked in Ontario. At its highest point, electric-vehicles made up around three per cent of the province's total passenger vehicle sales. That dropped to below one per cent after the rebate was scrapped.

The introduction of a federal rebate saw Ontario's electric-vehicle sales begin to climb again. The most recent data from Statistics Canada puts the numbers back to nearly where they were before the provincial cancellation.

But that is still well below levels seen in provinces with their own rebates, such as British Columbia and Quebec, which are seeing electric-vehicle sales of about 13 per cent and 10 per cent, respectively.

Electric-vehicle advocates say Ontario can’t be a leader in manufacturing while being a laggard in sales.

Now Ford has announced that he wants Ontario to be a world leader in the production of electric vehicles:

Ontario's "Driving Prosperity" plan focuses on repositioning the province's auto sector to build electric vehicles, as well as establishing battery production here, taking advantage of critical minerals found in the Ring of Fire. It aims to build at least 400,000 electric vehicles and hybrids by 2030.

Ontario has secured investments from big automakers such as Ford and GM to build new electric vehicles at their facilities in the province in the coming years, and the premier is looking to attract more.

"Our government knows it and the auto industry knows it: Ontario is the No. 1 place in the world to build the cars and trucks of the future," Ford said when he announced the strategy last month.

But Doug has no plans to re-introduce the rebate:

"What we’re talking about is how Ontario from the manufacturing side and the supply side can actually drive and support this kind of revolution in electric vehicles, create a bunch of jobs … rather than using Ontario taxpayers’ money to support the purchase of vehicles that were manufactured elsewhere," said [David]Tarrant, now a vice-president at Enterprise, a strategic communications firm.

There's an old saying: "Put your money where your mouth is." Doug puts his mouth where the money isn't.

Email ThisBlogThis!Share to TwitterShare to FacebookShare to Pinterest
Labels: Rebates For Electric Vehicles

If the planned American rebates go through, Ontario will need a domestic market or bye bye EV's. As dougie says : god help the people of Ontario.

The problem is that none of these GM or Ford vehicles are being built in Ontario. Compounding the problem, Ontario manufacturers like Honda, Toyota and Stellantis (Chrysler/Dodge/Jeep) are EV laggards. None of them currently offer EVs. But once the automakers make additional investment in Ontario contingent on an EV subsidy, Ford will do a quick about-face, regardless of what Jason Kenney wants.

One wonders if Doug realizes how much he has in common with dinosaurs, Owen.

Ford should know something about dealing with the American Elephant, rumley. Apparently, he doesn't.

Money talks to Ford, Cap. The problem has always been how long it takes to get him to listen.

And, like the dinosaurs, Lorne, climate change may do him in.

Does anybody know how much Mr. Ford's government subsidizes gas and diesel powered vehicles?

I can't answer that question, Toby. But I do know he doesn't like the carbon tax.

Au contraire, Owen. Ford responds to the well-healed like a working border collie responds to a whistle. In fact, I wouldn't be at all surprised if he dropped the Wynne government's EV subsidy at the request of Ontario's automakers.

At the time, Tesla was the big dog in the EV market. GM and Nissan were selling a few, but Tesla had the lion's share of the market. The big automakers would have loved to see Tesla brought down a peg. As the article indicates, killing the subsidy led to an immediate loss of EV sales that disproportionately hit Tesla, since they couldn't sell customers into gasoline-powered cars instead. Today's EV market has a lot more players and will continue to grow. But the subsidy will stay off until it benefits the Ontario's automakers.

It would have been more accurate to say that Ford listens -- selectively -- to the money, Cap. During this pandemic, he listened to the big stores -- Walmart, Home Depot -- before he listened to small businesses.

"Electric-vehicle advocates say Ontario can’t be a leader in manufacturing while being a laggard in sales." One would think a "Business Man Premier" would understand that, Owen.

I'm not sure that Mr. Ford possesses any depth of understanding about anything, perfect.