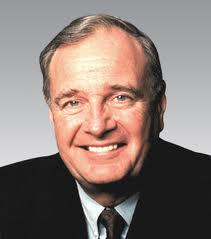 Paul Martin may have earned his reputation as Mr. Dithers. But, as Geoffrey Stevens points out, he possesses something that Stephen Harper and Vic Toews lack -- grace under pressure. Toews' wild diatribe about "standing with child pornographers" was not the first such Conservative outburst on that subject. Back in 2004, in what Stevens calls the "frenzied finale" to that election campaign,

the Conservatives, then in opposition, issued a pair of press releases attacking their opponents — then prime minister Paul Martin and the Liberals and Jack Layton and the NDP — for being in favour of child pornography

There was a kiddie porn/murder trial in Toronto in the news at the time, and the Conservative war room saw an opportunity to exploit the public's revulsion. They issued a gratuitous press release headed: "The NDP Caucus Supports Child Pornography?" and a second: "Paul Martin Supports Child Pornography?" That release stated: "Today, Martin says he's against child pornography. But his voting record proves otherwise."

Challenged by reporters later that day, Harper did not give an inch. "I'm not going to, in any way, give the Liberal Party any break in its record on child pornography," he said at a campaign stop. "It is disgraceful, they have had multiple opportunities to do something about it, and they have refused. ...I will attack them on it, and if (the Liberals) want to fight the rest of the election on it, good luck to them."


Martin's response was simple and direct:

"Look," he told reporters, "this is personal. I am a father and I am a husband, and he has crossed the line. He should apologize.

"Martin didn't get an apology. However, the Tory war room did retract the release attacking Martin, although not the one attacking Layton and the NDP.


That response says a lot about Paul Martin. It says even more about Steven Harper. Martin possessed grace under pressure. Harper doesn't know what grace -- under pressure or otherwise -- is.

Incidentally, "grace under pressure" was Hemingway's definition of courage.
Posted by Owen Gray at 8:21 am

On the one hand, I do admire Martin's ability to have stayed out of the mud there.

On the other hand, I think he would have done better than to simply say he was a father and blah, blah, blah.

In one or two sentences Martin could have exposed the inner stupidity of the whole "you love child molesters" meme and then hammered harper for his gutter politics and his gutter brain.

But you're right. These years of the politics of harper, Baird, Toews etc., has defiled and disgraced us all.

An unfair reputation as "Mr. Dithers" at least compared to the Harperites. The main difference is the trust and respect shown Canadians. Paul Martin would change his mind, tell you about it, and why. In Harperland, we've always been at war with Eurasia.

From transparency and accountability to income trusts to abuse of cabinet confidence and all the other issues championed by the PCs, by Reform, and even by the Alliance and the CPC itself, the present-day Cons are 100% flipped from years ago when their mouths were flopping. The major exception to this is the long gun registry, probably because Harper doesn't really care about the policies involved, it's a wedge issue for elections, and they milked it for all the donations they could get.

Even the gun registry bill shows CPC dithering. Previous versions of the bill contained a provision mandating gun sellers to confirm that the person they're selling to has a valid license. Canada's gun lobby was supportive of that. You don't want criminals to walk in with a forgery and walk out with firearms, right? But now it's vanished, and like all the other Conservative flip-flopping, they simply don't talk about it at all, and our media helps them get away with it.

Martin was a typical Liberal. He was weak and so was dealt with by a stronger man, Harper. Then the Liberals threw two more "men" into the ring, and they too were quickly dispatched by Harper. As Layton......pffff....don't even get started on that sissy.

I agree with you. When Martin changed his mind, he told you why -- and you knew he did it because he thought there was a better idea -- not because he wanted to target a group of voters.

But, more importantly, he had a personal code. There were lines which he would not cross.

But that other old chestnut -- what good around comes around -- is also true.

Such will eventually be the case with Stephen Harper.

Politics have become much meaner under Stephen Harper, thwap.

Perhaps I'm too optimistic, but I can't help but think that eventually Harper will be the target of that ill will -- just as Brian Mulroney was after he had been tagged as "Lyin' Brian."