The Road To Austerity 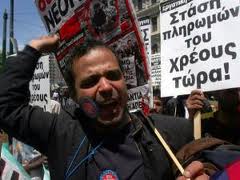 Before Stephen Harper and Dalton McGunity introduce their austerity budgets next month, they would do well to read Paul Krugman's column in this morning's New York Times. The advocates of austerity are everywhere these days. Unfortunately, Krugman writes, they have "substituted moralizing for analysis, fantasizing for the lessons of history."

This is particularly true in Europe, where Greece has become the tar baby no one wants to go near. But the consequences of European economic policy are now clear: "Greece and Ireland have had double-digit declines in output, Spain has 23 percent unemployment, Britain’s slump has now gone on longer than its slump in the 1930s."

Specifically, in early 2010, austerity economics — the insistence that governments should slash spending even in the face of high unemployment — became all the rage in European capitals. The doctrine asserted that the direct negative effects of spending cuts on employment would be offset by changes in “confidence,” that savage spending cuts would lead to a surge in consumer and business spending, while nations failing to make such cuts would see capital flight and soaring interest rates. If this sounds to you like something Herbert Hoover might have said, you’re right: It does and he did.

Now the results are in — and they’re exactly what three generations’ worth of economic analysis and all the lessons of history should have told you would happen. The confidence fairy has failed to show up: none of the countries slashing spending have seen the predicted private-sector surge. Instead, the depressing effects of fiscal austerity have been reinforced by falling private spending.

Krugman has never argued that debt is no problem. It must be paid down. But timing is everything. And the time to pay it down is not when unemployment is high. Austerity merely creates more unemployment, and deficits rise. Worse still, policy makers become even more divorced from the people in the streets -- who, in turn, become increasingly restless and angry.

That's not a theory. Ask Herbert Hoover.
Posted by Owen Gray at 8:56 am

Email ThisBlogThis!Share to TwitterShare to FacebookShare to Pinterest
Labels: The Austerity Solution

Only recently have I paid close attention to what's brewing in Greece. What's disconcerting is the rapid rise of radical right and radical left-wing movements. This in a country that endured a communist/fascist insurgency in post WWII that had to be put down by British military force and led to many years of military rule.

In the 16-24 age group, Britain's unemployment is at 22%, Italy 28%, Greece 48% and Spain just over 50%. These numbers are chronic and immensely destabilizing. Taken on their own they are worrisome. Compound that by austerity crackdowns and you have the formula for violent extremism.

Spiegel online reports that the Germans have concluded that, even with the second bailout, Greece doesn't stand a chance. The Germans believe that the sort of austerity demanded by the bailouts will be more than civil society in Greece can bear.

It's eerie how the radical right on both sides of the Atlantic has become today's mainstream right. We all thought that the pendulum would swing back as it always has. This time, it seems, we had it wrong.

One would have thought 'establishment' Republicans would have reclaimed their party in the aftermath of Bush/Cheney. Instead the fringe right has cemented its hold on the GOP.

Harper doesn't hold a candle to his American idols but that doesn't mean he won't keep heading in their direction. I am amazed at how we underestimate the significance of his actions to gag the public service and filter its communications with the public through information commissars in the PMO. That one act transforms Canada's public service into a political agency of the prime minister's office and that is a fierce blow to Canadian democracy.

Krugman writes that our elites have forgotten the lessons of history, Mound.