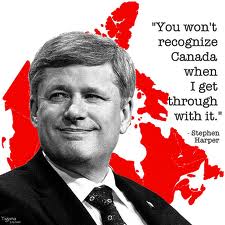 Jeffrey Simpson wrote in yesterday's Globe and Mail that:

Under the Harper government, Canada lost its bid for a Security Council seat – the first time it had ever been defeated. Were a vote held today, chances are Canada would get even fewer votes.

The latest egregious example of truculent morality was this week’s visit by Foreign Affairs Minister John Baird and Finance Minister Jim Flaherty to the West Bank. At a meeting with the most moderate leadership in Palestinian Authority history, the Canadians lectured the Palestinians on the terrible mistake they’d made in seeking United Nations membership, a bid that won strong support in the General Assembly.

The week before the West Bank lecture, the Prime Minister was telling Europeans how they should deal with their economic crisis during a speech in Davos. This likely impressed Canadians, but not Europeans. The last thing they need is gratuitous advice from a North American country that, frankly, doesn’t count for much in Europe, as anyone who’s lived there knows. And the advice is especially unwelcome when it’s layered with self-applause by Canadians about how well their economy has done.

In climate-change negotiations, the government’s attitude of palpable disdain for the Kyoto Protocol, coupled with its own deplorable record of inaction against greenhouse-gas emissions, shredded whatever credibility Canada might have aspired to enjoy.


And so it goes. Canada has caught what used to be an American disease -- telling the world that it should be more like us. The American authors Eugene Burdick  and William Lederer wrote a novel about this kind of  international smugness, The Ugly American.

Stephen Harper says he is hell bent on transforming Canada. Do we really want to go there? Are we to be known as the home of the smugly stupid?
Posted by Owen Gray at 9:16 am

"We had to destroy the country in order to save it."

Echoes of Vietnam, Dr. Dawg. The source of the quotation is somewhat obscure. But an American captain attributed it to a certain Major Booris.

Add an "h" to that name, and
the true source of that opinion becomes obvious.

Stephen Harper entered kindergarten when the Vietnam War began. He was not old enough to drive when it ended. One wonders if he has any knowledge at all of that conflict.

Which endorsed stephen harper in the last election.

Now they want to complain?

One assumes that, even though Simpson works for the Globe, he doesn't have to echo the paper's editorial policy, thwap.

Unfortunately, the Globe doesn't think as critically as Simpson does.