What Does Romney Believe? 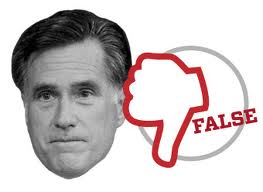 Things have not been going well for Mitt Romney. His speech in Detroit fell flat. And, this week, he made yet another gaffe. On the subject of the economy, he diverged radically from Republican doctrine. Cutting spending, he said, was a simplistic solution to America's problems:

If you just cut, if all you’re thinking about doing is cutting spending, as you cut spending you’ll slow down the economy.”


Republicans were aghast. Almost immediately, he issued a clarification. A Romney spokesman said,“The governor’s point was that simply slashing the budget, with no affirmative pro-growth policies, is insufficient to get the economy turned around.”

Paul Krugman claims that the gaffe proves Romney is a "closet Keynesian." In fact, he writes, Romney's real problem is that he isn't a Republican -- at least as Republicans define themselves in 2012. He keeps trying to please the Republican base. And that, writes Krugman, is why Romney is running a campaign "of almost pathological dishonesty:"

Every one of the Romney campaign’s major themes, from the attacks on President Obama for going around the world apologizing for America (he didn’t), to the insistence that Romneycare and Obamacare are very different (they’re virtually identical), to the claim that Mr. Obama has lost millions of jobs (which is only true if you count the first few months of his administration, before any of his policies had taken effect), is either an outright falsehood or deeply deceptive.


If Romney does become the Republican nominee, he will have done so at a terrible price. He will have convinced voters that he believes in convenience. No one questions his devotion to his family or his religion. But, more and more, they are concluding that his political principles depend on which way the wind is blowing.

Well, silly, Romney believes the trees in Michigan are "just the right size." What more do you need?

Oh yeah, he probably believes his Magic Mormon Underwear will save him from any natural disaster of any sort.

I have no doubt, Mound, that -- in a conventional sort of way -- Romney is a smart fellow.

Unfortunately, as you noted in a recent post, even university educated conservatives are not necessarily persuaded by evidence.

And the more he tries to appeal to closed minds, the more spineless he sounds.