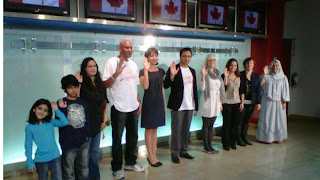 Stephen Harper likes to claim, as he did in Davos, that his government is a shining example of prudent financial management. That boast, Lawrence Martin writes is the Globe and Mail, in as believable as Sun TV's recent citizen reaffirmation ceremony.

From 2007 to 2011, Canada’s economic performance put us in the middle of the pack in GDP growth among 34 industrialized countries. Our unemployment rate is currently rising and nearing the U.S. level. It’s true that, comparatively speaking, we’re doing well on a number of other economic indices. But given the advantages the Conservatives enjoyed when they took office – the big surplus, the well-regulated financial sector, the natural-resource-laden riches – how much of an accomplishment is it? When you start a race a lap ahead of the field, how hard is it to be among the leaders?


The Harperites are very good at dumping information down the memory hole. But, Martin writes, it's good to recall a little history:

Let’s recall the two-point GST cut that tore a giant hole in the revenue base, accounting for a good deal of the deficit. Let’s recall the prerecession spending – having inherited a $13-billion surplus, the Harper/Flaherty team spent so excessively that we were close to a deficit by the time the recession began. Let’s recall the slashing of corporate tax rates and the government’s easing of mortgage rules and backing of risky loans that further bled the treasury.

Put it all together and what it shows is that, with more prudent fiscal management from the same guy who lectured other countries on debt in Davos, we could have coped with the recession without driving our treasury into a large deficit hole.


Martin ends his article by quoting an official at the finance department. When asked what the Harper government had done well, he answered, "The PR."

Indeed. Stephen Harper runs a superbly competent PR machine. He does not run a competent government.