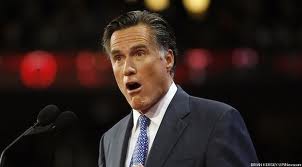 Anne Richards, the late Governor of Texas, once said that the man who succeeded her -- George W. Bush -- was born "with a silver foot in his mouth." Mitt Romney suffers from the same disease. Over the weekend, he told the Conservative Political Action Conference that he was a "severely conservative governor." It was an interesting choice of words. And as awkward as the phrase might be, it surely describes today's Republican Party.

Jeffrey Simpson reminds his readers that the people who now populate Republican ranks have been around for a long time:

Anyone with a passing acquaintance with U.S. history understands the power of the appeal that less government is the best defence of liberty. They will also know that, in such a diverse country, with so many regional, religious and ethnic cleavages, social and political movements of all sorts have always sprouted.

That evangelicals are so powerful today harkens back to the Pilgrims and the Quakers, the Great Revivals, William Jennings Bryan, spiritualists, Social Gospellers, Billy Graham, the Elmer Gantry types and all the television evangelists of past and present.

That Mr. Paul’s supporters are isolationists to the core recalls Washington’s “no foreign entanglements,” Charles Lindberg, William McCormick and the many other Midwestern isolationists of yesteryear. That rank-and-file Republicans see conspiracies against their liberties from within and without reminds us of witch hunts from Salem to Joe McCarthy.

That Fox News roasts the President echoes Father Charles Coughlin’s radio programs blasting Franklin D. Roosevelt. That the two parties are so divided on almost everything is nothing new, since, in the early decades of the new country, Federalists and Republicans fought over everything. Even such an idealized persona as Thomas Jefferson paid newspaper hacks to write scurrilous articles about his principal rival, John Adams. That race underpins voting patterns and social attitudes is nothing new at all.


What is new is that all of what used to be fringe elements have taken centre stage in the 21st Century Republican Party. That is no accident of history. Paul Krugman writes that it is the result of a strategy which has gone horribly wrong:

For decades the G.O.P. has won elections by appealing to social and racial divisions, only to turn after each victory to deregulation and tax cuts for the wealthy — a process that reached its epitome when George W. Bush won re-election by posing as America’s defender against gay married terrorists, then announced that he had a mandate to privatize Social Security.

Over time, however, this strategy created a base that really believed in all the hokum — and now the party elite has lost control.

The patients have taken over the asylum. It's no wonder that the GOP is so severely misguided.

CORRECTION:  Dean Esmay, at The Moderate Voice, reminds me that the subject of Ann Richards' barb was the first president Bush. It's always wise to differentiate between Bushes.
Posted by Owen Gray at 9:00 am