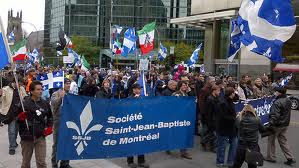 Chantal Hebert doubts that the NDP's hold on Quebec is permanent. She points to dwindling support for the party:

Ten months after the fact, the so-called Quebec orange wave feels more like a devastating flash flood for Quebec’s federal representation than the precursor of a lasting New Democrat tide in the province’s politics.

With 58 MPs, the biggest Quebec membership drive in the party’s history underway and two candidates with strong local roots in the race, the party did not come close to filling the 500 seats of a downtown Quebec hall.


Much depends on who the party chooses as its leader.  That leader will have to convince Quebecers that he or she knows who they are, while convincing the rest of Canada that it matters as much as Quebec does. It's not an easy task -- particularly, as Lysanne Gagnon notes, because the two solitudes are getting more solitary:

Quebecers have lost the thin interest they had about the rest of Canada, where, on the other hand, there is a growing feeling of irritation mounting against Quebec – Quebec and its fat equalization payments that serve to finance fancy programs like $7-a-day daycare. This anger is still muted and expressed in rather polite terms – this is English Canada after all – but it is bound to increase as the centre of gravity moves to the West.


In Ottawa, the powers-that-be are unconcerned.They are convinced that recognizing Quebec as " a nation within a nation" has done the trick. The province, they say, has decided to exist in its own parallel universe and will not impede the Harper juggernaut.

That notion comes straight out of the George A. Custer Handbook On Leadership. The Harper government has gone out of its way to antagonize Quebec --by appointing a unilingual spokesman for the prime minister and a unilingual Supreme Court Justice. Worst of all, it has ignored Quebec's concerns about the omnibus crime bill, while insisting that the province bear its share of the costs.

The Harper Party assumes that, because no charismatic champion is presently on the scene, sovereignty is dead. That issue is never dead. And the charismatic leader is always there, although not immediately recognized. All he or she has to do is strike the match. The Harperites have produced all kinds of combustible material.

They don't, however, understand how easy it is to start a brush fire -- and how hard it is to put it out.
Posted by Owen Gray at 9:08 am

Email ThisBlogThis!Share to TwitterShare to FacebookShare to Pinterest
Labels: The Coming Upheaval in Quebec