We've Been Played for Chumps 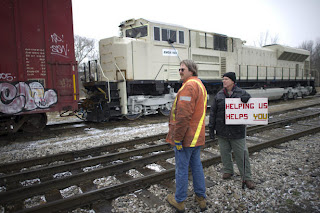 It's been quite a week. It began with Mitt Romney declaring, "I'm not concerned about the very poor. We have a safety net there." It ended with Caterpillar shutting down its locomotive plant in London, Ontario and moving operations to Indiana -- two days after Governor Mitch Daniels signed legislation making Indiana a right to work state.

It's not that Caterpillar is in trouble. Last year the corporation made $4.9 billion -- an increase of 83% over last year. Caterpillar bought the plant from General Motors in 2010. In 2008, Prime Minister Stephen Harper gave the plant $5 million in federal tax breaks on the theory that such largesse created jobs. On January 1st, Cat locked out its workers and issued an ultimatum -- accept a 50% pay cut or we'll shut down operations. All that was needed was Governor Daniels cooperation.

Mr. Romney claims that America needs the same medicine. The problem is that, while taxes would be cut for the wealthy, they would rise on those who make much less money. As Paul Krugman pointed out yesterday:

According to the nonpartisan Tax Policy Center, Mr. Romney’s tax plan would actually raise taxes on many lower-income Americans, while sharply cutting taxes at the top end. More than 80 percent of the tax cuts would go to people making more than $200,000 a year, almost half to those making more than $1 million a year, with the average member of the million-plus club getting a $145,000 tax break.


So where is that safety net? And what about Romney's claim that -- because of a huge, unwieldy bureaucracy -- “very little of the money that’s actually needed by those that really need help, those that can’t care for themselves, actually reaches them?”

Krugman takes on that argument, too. Once again, what Romney says is simply not true:

This claim, like much of what Mr. Romney says, was completely false: U.S. poverty programs have nothing like as much bureaucracy and overhead as, say, private health insurance companies. As the Center on Budget and Policy Priorities has documented, between 90 percent and 99 percent of the dollars allocated to safety-net programs do, in fact, reach the beneficiaries.


Romney says that the safety net doesn't work. Harper says that corporate tax cuts create jobs. Have we clued in yet? We've been played for chumps.

It is time to nationalize such industries, particularly if they have Canadian developed intellectual properties. When the Conservative government declares that Canada is open for business just invites corporate thieves to pick off the best of our economy.

Canadians have a right to expect that their government will protect their strategic assets, Philip.

With this government, everything is for sale.