Now For The Hard Part 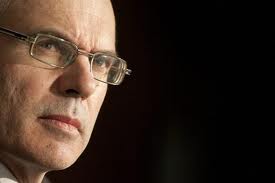 Don Drummond has thrown the fat in the fire. If you lived through the Harris years, Martin Regg Cohen writes, you're going to remember what is about to happen again. But this time, he predicts, it will be different:

Rather than across-the-board cuts from the late ’90s, look for out-of-the-box thinking: No welfare cuts or reckless hospital closings, but consolidation and transformation. And communication.

It would be nice if that happens. We're seeing the Harris scenario unfold in Ottawa as several of his alumni attempt to steer the ship of state.  But, even if the McGunity government goes about making the cuts differently, it's going to be difficult to get Ontarians to buy the notion of shared sacrifice. We have lived through thirty years of unbridled individualism. A whole generation knows no other way.

Drummond says that we must:

All easier said than done. Government cuts could mean lots of lost jobs. And, if that happens, tax receipts will go down, not up. The cuts could cause the deficit to rise. Now the hard part begins.
Posted by Owen Gray at 9:13 am

Email ThisBlogThis!Share to TwitterShare to FacebookShare to Pinterest
Labels: The Drummond Report

Well, they could stop prosecuting small marijuana possessions right off the top. Then, yes, if you are really after the boomer health care costs, and have unemployed family members, give them $$$ to look after Grama at home.

But why no talk of increasing revenues? Why is it only one half of the solutions being addressed?

And really, will interest rates go up substantially in the next 5 years? Not bloody likely.

But, at some point, what Ronald Reagan called "revenue enhancements" are going to have to kick in.

Even Reagan understood that fact of life.

Before the government starts cutting services they need to revisit the Harris governments program and learn what damage it did. They drastically cut welfare benefits on the belief that the poor should pay the price first and foremost. We have yet to recover from these cuts. There was also a wholesale lay off of nurses, (my brother and his wife gave up on Canada and moved to the US where their professional skills were welcomed). This left a large gap in the age of nurses that continued to cause problems as the older overworked nurses came of age. We are now just beginning to recover. At the same time the Conservatives found money to build hospitals. Every major city in Northern Ontario has a new expensive hospital. What a shame if they are to be inadequately staffed. Once again, nurses will be overworked and under appreciated. There are lesson to be learned from such past mistakes.

Those of us with long enough memories, Philip, can recall that Harris drew an analogy between nurses and hoola hoops -- claiming that there was no market for either of them.

That's when I understood why Harris was a failed teacher.