Rule By The Limited 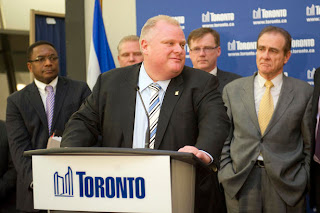 Today is High Noon for Gary Webster. Christopher Hume writes in the Toronto Star that:

Already, [Mayor Rob] Ford has inflicted serious damage on the city, painful, but none of it fatal. However, if a group of his designated cronies actually does fire Toronto Transit Commission chief general manager Gary Webster Tuesday afternoon as expected, it will be time to start worrying about the future of things.


Ford and his brother -- who claims that the TTC needs "an enema" -- have never had a sense of how things work in a democracy. Hume writes:

Ford’s actions demonstrate a degree of disrespect that raises the question of his ability to lead. Governance itself doesn’t care about outcomes; only how they are reached. That’s why process matters, especially in a democracy, which by its nature, is divided and fractious.


An apostle of the New Philistinism, Ford represents the revenge of those who are guided by their guts, instead of their heads. They are apostles of Ignorance.Their politics stretch well beyond city hall. Vic Toews treated us to more of the same last week in Ottawa. Claiming to believe in limited government, they insist that power be concentrated in fewer and fewer hands.

Ford and Toews offer stark proof that today's apostles of limited government are people of limited talent and limited vision.
Posted by Owen Gray at 10:05 am

Needless to say, Owen, I agree with almost everything you have said. However, let me make one small comment. I think contemporary rightwing politicians like Ford, Harper, Baird, et al, have given emotions a bad name. As you said Ford represents a new generation of politicians that is guided more by their "guts" then their heads. Now, overlooking the pun (which I do appreciate), I think we should only use this kind of comparison very carefully. After all, it wouldn't really matter to me what kind of "rational" defence of their politics they were able mount, (reason, like statistics, can be manipulated to defend a lot of horrible stuff ), I would still be a socialist. I often think of Einstein's fabulous essay "Why Socialism" in which he pointed out that our so-called "economic sciences" under capitalism is hopelessly tainted by a prevailing economic ideology and one need not have any specialized knowledge to advocate for a moral socialism.

Some of the best people I have known have little knowledge of politics or economics - they just know what is right and what is wrong. The real problem is the wilful control of facts for the expressed purpose of appealing to the worst in human emotions. People like Harper and Ford know what is going on, they simply hope people will ignore certain facts if they can use negativity and fear to manipulate people.

I agree, Kirby, that not all "rational" arguments are defensible. And I also agree that there is a place for gut reactions.

In fact a gut reaction which was tinged with guilt might serve as a healthy corrective for right wing politicians.

The problem is that our present poobahs have no sense of shame.

Ford is as stupid as he looks.

(Another of my unremarkable observations.)

Unfortunately, thwap, the good people of Toronto had a hard time judging a book by its cover.

However, I suspect they don't like what they can now clearly read.