Time To Get Angry 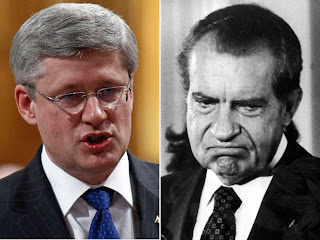 Both Tim Harper and Dan Gardiner have called for a public inquiry into the robocall scandal. Yesterday Gardiner wrote:

The Conservatives insist they want the truth to be exposed. If that's true, they must appoint a fully independent, fully empowered judicial inquiry.


A public inquiry is the last thing Stephen Harper wants. He knows how the Gomery inquiry doomed Paul Martin's government and how it enabled his own. Despite his suggestions that opposition parties bring their evidence to Elections Canada, he will do everything he can do deny the agency access to any and all the information he possesses. Every effort will be made to run out the clock on this scandal.

Tim Harper reviews other successful attempts by this government to subvert its opposition:

When the Conservatives twice shut down this place there were sporadic protests and rallies packed with opposition operatives, but most Canadians couldn’t spell prorogue, let alone care about the ramifications.

When they were found to have violated Elections Canada spending rules in the so-called “in-and-out” case, Canadians not only yawned, they couldn’t understand the accounting skullduggery.

When they were found in contempt of Parliament, Conservative strategists boldly stated that a breach of an arcane rule would make no difference to voters, and they were right.

When they booted unfriendlies from their campaign rallies, limited journalists to a set number of questions and used supporters to boo the questions they didn’t like, the nation shrugged.


The Harper government will do everything in its power to put this fire out. It will be up to the opposition parties, Elections Canada, the Canadian press and -- ultimately -- Canadian voters to keep it burning.  As Tim Harper suggests, it's time for Canadians to get angry.
Posted by Owen Gray at 8:51 am

I think that the Gomery inquiry was the most significant lesson ever taught in Canadian politics - never, never try to own up to anything because it will hurt you politically. I suspect that we will never again see a public inquiry in Canada (at least one that is looking into the actions of a sitting government). The lessons are very clear - divert, blame others, drag your heels, keep quiet, and only if you end up in court and it looks like you will loose then quietly plead guilty and sweep it all under the rug as quickly as possible, all the while insisting that your are not actually guilty of anything or some lackey actually did it, or everyone does it.

Unfortunately, the very worst part of this story has been that future governments will surely learn from the success of Haper's recalcitrance and we are thus irretrievably pushed a little further into that cesspool.

Harper will fall, they always do. But the example he has set and the injuries to democracy he has created will go merrily on.

time for Canadians to get angry and focused - don't let them distract us with bullsh*t.

Harper has provided the cynics -- and I guess that's the majority of us -- plenty of proof that stonewalling, denial and attack pay political dividends, Kirby.

There are other institutions which can work in the opposite direction. As was the case with Richard Nixon, the courts are one of those institutions.

And, as Woodward and Bernstein proved, the press is absolutely indispensable. It's time for the press to do its job.

"Separatist Coalitions" was the latest example of such. It's ironic that "Pierre Poutine" supposedly lives on "Separatist Street."

All this does not surprise me. Do you remember how the Conservatives very carefully targeted certain ethnic rich ridings. This is just another way of targeting ridings. In the Nipissing riding the
conservatives won by 18 votes, defeating the incumbant liberal. There has been at least one reported incident of one of these faux robo calls. In such a riding it would not take much to swing the vote and steel the election.

We usually think of doing this in order to win the riding but for a certain party it might be advantageous to deflect the riding from on of the other parties if they cannot win it themselves. For instance the Conservatives could direct things in favour of the NDP if they were fearful of the Liberals having a minority win or even be the official opposition.

Did the Conservatives not bring in some back room boys from the Republican party for advice. Voter supression in the US has a long history and is still widely used.

The Star reported yesterday, Philip, that the Responsive Marketing Group -- which made calls for the Tories out of Thunder Bay -- has done work for the Republican National Committee.

There is a connection.

Does anyone remember Howard Beale?: "[A]ll I know is that first, you've got to get mad!"
http://www.youtube.com/watch?v=QMBZDwf9dok

I can't deny the need to get angry; to be moved by things that matter. Perhaps this is more of a responsibility than a need.

But we also have a responsibility: to be careful. And one can be angry and careful at the same time (...I hope).

It sounds as if a lot of careful investigative reporting and police work (ongoing) is what led to this becoming news in the first place. I hope anger, at least among our political leaders, can be managed so as to avoid... blindness; foolishness; mistakes. I have a great deal of confidence in Rae's ability to appropriately balance reason and passion. I have less confidence that such an ability will be politically effective.

Perhaps I want to distinguish between "anger" and "outrage" (or "madness"). As moving as I find Howard Beale's rant, I think we need to be more careful. We need to learn as much as we can, as soon as we can, so that we can know exactly where and how to direct our (measured, appropriate) anger.

I am somewhat surprised that I have not been particularly angered or outraged by this. The word "disappointed" more accurately describes how I feel. And yet, I'm also not at all surprised. I won't be surprised if these voter-suppression-accusations turn out to be largely accurate, and part of a large-scale, highly-coordinated, well-funded operation that can be traced to the Conservative leadership.

I'm not surprised this has happened. I won't be surprised if the Conservatives are behind it. But my disappointment is more generalized. I'm disappointed in us all (yes, myself included).

I find it hard to take some comfort in the fact that the Conservatives won their majority with less than 40% of the vote. That sort of fact usually gives me some hope. But at the moment, it just highlights how "stacked the deck" has been, remains, and will remain.
-mg

I agree that we should not go off in a mad frenzy. But things won't change until, like Beale, we declare that we "won't take it anymore."

There are several Nixonian parallels here. One is that it took a long time for Nixon to resign. He did so because the courts and the press did not let him off the hook.

How do we get a public inquiry into this?

The opposition can't do it. How do we FORCE harper to call it?

Because he's not going to do it on his own.

I'm no constitutional expert, Anon. But it seems to me that the courts can force the Conservatives to do things they don't want to do.

The courts can't force an inquiry. But they can force the government to hand over documents to Elections Canada.