The Rules Have To Change 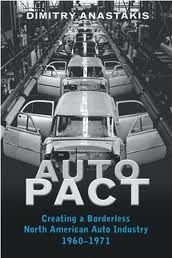 Tom Walkom writes that, as things stand, not much could have been done to keep the doomed Electro-Motive plant in London. He points out that Bombardier no longer manufactures locomotives in Canada. It buys them from a Catapillar plant in Mexico. The problem lies not so much with Caterpillar or Bombardier, but with the rules of the game. "The real villain," he writes, "is unrestrained globalization.

As long as goods and capital are free to move unimpeded across national borders, companies — even nice ones — will locate where wages are cheap.

All of this could be changed. But to do so would require the fundamental rethinking of belief in the unalloyed virtue of free trade, a belief that the country’s political and business classes accept on faith.


A good place to start is with the now defunct Canada-United States Automotive Product Agreement.  That agreement

removed tariffs on cars, trucks, buses, tires, and automotive parts between the two countries, greatly benefiting the large American car makers. In exchange the big three car makers (General Motors, Ford, and Chrysler) and later Volvo agreed that automobile production in Canada would not fall below 1964 levels and that they would ensure the same production-sales ratio in Canada.


American manufacturers unloaded health care costs onto the Canadian government; and they manufactured product in Canadian dollars. Those advantages went to the bottom line. In return, Canadians got thousands of manufacturing jobs and lower cost automobiles. It's true that most of the jobs went to southern Ontario and were not evenly distributed -- just as resource extraction jobs are now going to the prairies.

The point is that the Autopact was a win-win for both countries. What has occurred over the last thirty years is a race to the bottom. Without new rules, capital will always flow to the lowest cost locations. In the new economy, the winner takes all. And that new paradigm now figures in our politics. Stephen Harper only got 25% of all Canadian votes. But he's now in the catbird seat.

Generally speaking, it's not a good idea to go backwards. But, if we're looking for a road map to the future, we could begin to look to what we used to have. The Autopact is dead. But the model isn't. The rules have to change.

This entry is cross posted at The Moderate Voice.
Posted by Owen Gray at 8:53 am