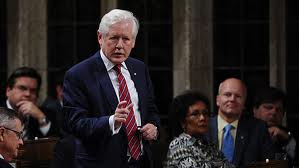 In the last six years, the Harper Conservatives have been very good at defining the terms of debate. That is, they have set the premises of those debates, and the opposition parties have accepted those premises.

Their first -- and  overriding -- premise was that trickle down economics works. They continue to hold to that premise, even though thirty years of evidence has proved that the benefits of rewarding the rich have not trickled down to those on the bottom rungs of the ladder. In the last election, they argued that coalition government was illegitimate because it would require cooperation with the Bloc Quebecois -- even though the Harrperites had proposed such a coalition to topple the Martin government.

Now they argue that Canada's Pension system is "unsustainable." The term is the prime minister's. But two days ago, Bob Rae rose in the house and destroyed that premise.  There is indeed a crisis. But the problem is not that pensions are unsustainable, he said. The problem is income inequality:

Yes, there is a crisis. The prime minister’s answer to that crisis is to make the rich richer and make the poor poorer. Conservatives have no problem saying that they will split incomes for middle-class families. They have no problem granting a significant advantage to people by doing that income splitting, but they have a serious problem with respect to the social justice of the people who are making less than $30,000 or $40,000 a year. That is the problem they have and that is where we have to say, yes, everyone wants prosperity, but we want prosperity to be shared. We want the prosperity to be sustainable, but we want that sustainability not to be applied and supplied on a selective basis.


The Conservatives will deny that Canada has a problem with income inequality. For them, it is a simple fact of life. But what they accept as a fact does not have to be accepted by all parties. In fact, the Conservatives are in denial. They have a record of ignoring facts. Mr. Rae has signalled that his party does not accept income inequality. One hopes that the NDP will also send a similarly strong signal on the subject.

Things will only begin to change in Canada when the opposition parties begin to define the terms of debate.