A Culture Of Fear 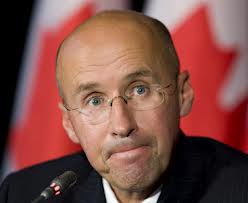 Yet that very same government, Tim Harper writes in today's Toronto Star, has frustrated Mr. Page's attempts to do his job:


Page is preparing to take more than 60 government departments and deputy ministers to court in a bid to force them to provide information on government cuts, information to which he is entitled under the mandate given him by the very government which is now forcing him to the courts.

It speaks to the culture of fear in the capital, this government’s predilection to demonize its opponents and makes a mockery of what is left of its pledge of accountability and transparency.


It speaks to more than that. It tells a tale of tyranny -- a saga of one man rule.

The prime reason we send our representatives to Ottawa is to review and approve how the government spends our money. Yet the Harper Conservatives -- in fact, all of our representatives -- will be expected to take the government at its word.. It's their money. And they are superb managers. The problem is that Page has consistently shown that they are incompetent managers. In 2010,

Page questioned the government’s spending on its law-and-order agenda, cast doubt on the infrastructure spending and job creation, and challenged Flaherty’s target for balancing the books.

Last winter, when Page said Old Age Security is properly funded and can continue on its current path with a retirement age of 65, Flaherty dismissed Page’s view as “unbelievable, unreliable, incredible.’’

He has butted heads with the government on the true cost of its troubled F-35 military procurement and its Afghanistan mission.


Jim Flaherty questioned Page's credibility. And Tony Clement argued that Page was acting outside his mandate. Flaherty and Clememt are quite prepared to do their master's bidding.

What about those other Conservative MP's? It's time they held their own government to account -- instead of the other way around. It's time they stopped living in fear.

That someone in the office would actually do their job without political interference seems to be an unexpected consequence of the Harper Government.

You would think they would try to avoid going to court. The government seem to usually lose in court. They seem to spend a lot of money trying to defend the indefensible.

Perhaps they lose in court, Philip, because they actually believe they are above the law.

It's the height of arrogance.

Of course, Harper is above the law. Don't people remember what Harper said? I am the LAW. I MAKE the RULES. Harper is Canada's great dictator.

Harper the deceiver, has permitted himself to, lie, deceive, thieve, use dirty tactics, dirty politics and cheat to win. There are very few Canadians, who don't know Harper for what he is.

However, do not dare say. Any province that has a lick of sense, would get the hell out of Harper's Canadian, garden of evil. I don't like Communism. I resent being sold to Red China. I don't like that horrible country being, right on our Canadian ground. This country isn't remotely Canada, anymore anyway.

My sense is that the anger you express is growing, Anon. Now it has to be focused on putting the Conservatives out of office.

Unfortunately, that will take some doing.