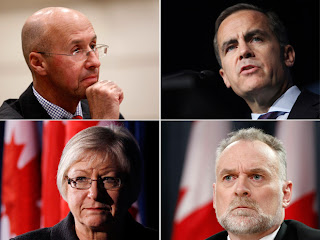 Amid the cynical furor of Canadian politics, Andrew Coyne singles out four people -- three men and one woman -- who have credibility because they are guided by conscience, not convenience. Coyne writes:

Politics is about packs; the more ruthless, more disciplined, more pack-like of the parties mauls the others into submission. It prizes loyalty, not before all other virtues, but to their exclusion. We hunt together, the aspiring politician is told. Stick with the pack. And so each learns to scrape and smear, to manipulate and deceive, to promise one and threaten another, exactly as he is told.


Luckily, there are some people who refuse to run with the pack. Coyne cites four of them: Parliamentary Budget Officer Kevin Page, Bank of Canada Governor Mark Carney, Former Auditor General Sheila Fraser, and her successor Michael Ferguson.

Kevin Page has encountered nothing put stonewalling from the Harperites, who insisted on government accountability:

Various ministers of the government have been sent out to smear him, first claiming he was incompetent, then, when his numbers were borne out, that he was exceeding his authority. Through it all the PBO has kept digging, kept issuing his reports, kept demanding to see the data to which he is entitled under the law. And slowly, grudgingly, the government has been forced to yield.


When Mark Carney announces that interest rates will remain stable for fifteen months, people know he means what he says:

That credibility is partly personal, partly institutional. It is a reputation that has been earned over many years, under both Carney and his predecessors: A Bank of Canada governor does not make promises he will not keep, or say things he knows to be untrue. More than an expectation, it is almost a definition.


And, when Sheila Fraser accused the Chretien Liberals of breaking "every rule in the book,"

there were furtive attempts to go after her as well. Whisper campaigns were put about to the effect that she was out of control, that she was embarked on a “witch hunt.” We recall how that turned out. Whatever institutional power the government might have possessed, Fraser’s  reputational power demolished it. It wasn’t even a fair fight.


Finally, there is Michael Ferguson. He called the F-35 purchase the boondoggle it was:

Even as the government was pretending to accept his findings the former parliamentary secretary to the Defence Minister, Laurie Hawn, was circulating a letter accusing the Auditor General of misunderstanding such basic terms as “acquisition,” of being unable to get basic facts right, even of being “disingenuous.” But the public knew whom to believe.


All four of these people have been smeared by Canada's elected politicians. But, despite the attacks, they have credibility. No one believes our politicians. At the moment, it's only the people of conscience who stand between us and plutocracy.

Email ThisBlogThis!Share to TwitterShare to FacebookShare to Pinterest
Labels: Conscience and Plutocracy

We are blessed in deed to have such people who are bureaucrats who stand outside of politics and government and evaluate it to all our advantage.
The appear to be incorruptible. The institutional strength of their office and mandate is a credit to our country's recognition for the necessity of such "checks" on government, political and bureaucratic.

You can be sure, Philip, that the powers that be are plotting the demise of some of them -- like Kevin Page.

However, the more they tell the public about what is going on, the harder it will be for the government to get rid of them.

good column. It is important to be reminded we do hve people of integrity in government. These 4 mentioned here are doing a wonderful job of keeping the government honest. If not for people such as them who knows where we would be. I trust them a lot more than any politician.

We have become very cynical about government, e.a.f.. In fact, conservatives work very hard to make us cynical.

They purposely seek to make government dysfunctional, knowing that -- if we give up on government -- the march towards plutocracy can go forward, unimpeded.

I couldn't agree more with Coyne on these exemplary Canadians. Too bad we can't outsource the PM and his incompetent, lying cabinet to people worthy of the title. I'm also quite unimpressed by Mulcair and Rae as they have yet to really grill and challenge harper on this "jobs and the economy" meme he wears, but has stood by idly while his policies rip apart business after business.

And the irony, waterboy, is that Harper and Co. claim to be friends of business.