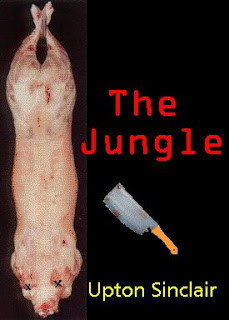 Mark Twain knew what he was talking about. So did Upton Sinclair. Yesterday, The Sixth Estate suggested that the next self regulation debacle is going to be in the airline industry, which is also subject to the government's Safety Management System:

We don’t have to wait for a major airline crash to discover that there are major systemic flaws in the SMS approach as taken by the government, although that’s probably what it will take, if the agriculture system is any indication in this regard. Recently the Auditor-General examined airline SMS and the results were pretty much what you’d expect when you combine a manic deregulation agenda with the general incompetence of the Harper Cabinet.


Specifically, the Auditor-General found that under the new system, Transport Canada decides in advance which companies are considered at high risk of an accident, and then it focuses on those companies. That was their first failing grade: the risk assessment process is vague and is often ignored. The Auditor-General reported that “the Department did not often use the standard risk indicators” — in other words, they massaged the numbers when it came to individual airlines. I quote: “for most large air carriers… and large airports,… Transport Canada is missing key risk information and has no formal process in place to collect that data.” So they’re winging it.

In other words, relying on data which business itself generates, the government focuses on operations it considers unsafe and completely ignores everyone else. Where is the incentive to tell the truth?


Now Tom Walkom writes that the same approach is being used by Health Canada to monitor drug safety:

What’s this got to do with XL Foods, an Alberta meat packer whose beef products are being recalled as unsafe in Canada, the U.S and Hong Kong? The answer is that both are examples of what happens when governments cut so-called red tape without thinking through the consequences.

In both cases, entire regulatory systems were subtly changed so that government officials would view the industry being regulated, rather than the public, as their primary client.


Governments -- and most particularly the Harper government -- now see business as its primary client. And, as always, when business or government cuts costs, someone has to make up the difference. When government reviews the statistics business generates, instead of checking the actual products or services it produces, we get lies and damned lies.

Email ThisBlogThis!Share to TwitterShare to FacebookShare to Pinterest
Labels: The Tainted Meat Debacle

Owen, there is a very interesting piece in today's Star by Alex Himelfarb that explores the development of the 'market mentality' that pervades our government and many others, facilitating the kind of self-regulation the harper regime has embraced with such relish. It is well-worth reading: http://www.thestar.com/opinion/editorialopinion/article/1268708--governing-in-the-dark-bargain-basement-citizenship

I enjoy Himmelfarb's work immensely, Lorne. I have bookmarked his blog -- where the piece in The Star is also posted.

There are a number of quotable passages; but I was particularly struck by this one:

"We are not simply talking about our market economy, but more our conversion to a market society in which money can buy almost anything, we are more consumer than citizen, and inequalities and their corrosiveness grow, undermining solidarity and any sense of a common good."

As the Ontario government quivers -- afraid of the bond rating agencies -- we need to remember that those very agencies gave worthless securities grade A ratings.

So why do we bow and scrape before them?