Heading For The Exit 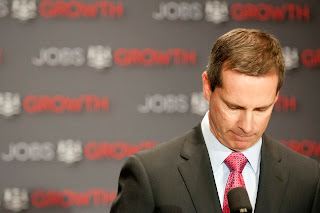 Very few politicians have the good sense to quit while they're ahead. And so it was with Dalton McGunity. Perhaps he figured he would go down to defeat in the last election. And he would have, if Tim Hudak's Conservatives had not imploded. In opposition, the party could have renewed itself in the traditional way.

But to almost everyone's surprise, McGuinty almost won a third majority mandate. One seat may not seem like much. But, sometimes, it is everything. Faced with difficult labour negotiations, he needed that one seat to pass a wage freeze. So he convinced Elizabeth Witmer to resign and went to war with his traditional allies, Ontario's teachers.

It's hard to know who was giving McGuinty strategic advice. Perhaps he kept his own counsel. At any rate, it was bad advice. Faced with the NDP -- which insisted that the government negotiate with its employees -- and the Conservatives -- who wanted to tear up union contracts -- McGunity had no allies.

So he is betting that, by proroguing the legislature and getting out of the way, he can press the reset button. We'll see how that works out.
Posted by Owen Gray at 8:56 am

Is this not like Harper proroguing parliament when he was in trouble? I have trouble supporting this prorogation, given that I was against Harper's prorogation.
-mg

I agree with you, Anon. I can't support the prorogation of the legislature.

As I said, we'll see if this works.
I have my doubts.