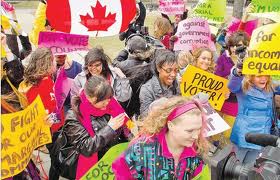 Today -- when Justin Trudeau formally enters the Liberal leadership race -- his mission, Lawrence Martin writes in the Globe, will be to shake up the system:

At 40, Justin Trudeau isn’t terribly young, but he has the aura of youth. As such, and given the other marketing advantages he possesses, he has the potential – slim but not out of the question – to lead the way for generational change in the exercise of political power in the country. The clock is ticking on the baby boom legions. They’ve run the show too long. Those behind them have watched in despair. They don’t vote. For the most part, they’ve stayed on the sidelines.


There was a time when 40 was considered the beginning of middle age. But we baby boomers, used to being the centre of attention, are refusing to open the corridors of power to our children. Those in power have proclaimed that Mr.Trudeau is just a kid.

It's true.that Trudeau has a lot to prove. But, Martin writes, if he can ignite a sense of idealism among the young, he will have done this country a great favour:

Idealism is the currency of the young and, if Justin Trudeau is to succeed and the Liberal Party to have new life, a new sense of it is essential. His appeal should be one of broad scope. It should be nothing less than an appeal to “change the system.”

The young are so turned off by how Ottawa operates that only a sweeping reform will suffice. Pierre Trudeau’s vision for stirring new interest in politics was “the just society.” Justin Trudeau’s should be “the new democracy” or something of that sort. It’s an appeal that cuts across party lines, regional lines and age barriers.


Mr. Harper has just told the young that they will have to work two years longer than their parents before they can retire. The job prospects they face are much bleaker than their parents' prospects at their age. And, when young Quebecers objected to a tuition increase, Mr, Charest's response was the political equivalent of telling them to go to their rooms.

However, it's worth noting that the young got their way. For better or for worse, a new government has rescinded the tuition increase. The lesson should be pretty clear: It's much better to engage the young than to go to war against them.
Posted by Owen Gray at 8:08 am

I agree with everything you have written here, Owen, but I must confess to having reservations about the salivating that the Liberals are doing over the prospect of another Trudeau leading them. If he has the policy bona fides, then he merits attention, (although to my knowledge he has not said much since he became an M.P.) but if the party chooses him simply because they think he will get them votes, I'm afraid it will simply be an affirmation of what many see as their own bankruptcy of ideas.

I've been with Martin on this for some time. Although I have reservations about Junior, it's imperative that we do the generational transition of political power sooner and more completely than ever before.

For the first time in modern history, Owen, we are today making indelible choices that will shape the future for generations to come. We are valuing our immediate and short-term interests over the interests and needs, perhaps even survival, of those to come for a century, perhaps many centuries to come. We are larding our pantries without restraint and kicking every conceivable problem down the road for someone else to endure.

Democratic society is nigh impossible to maintain if it doesn't provide adequately for the future. I wish I could say that was exclusively a Conservative failing. It's not.

I agree, Lorne. The Liberals have fallen for a "messiah" before. That's who Michael Ignatieff was supposed to be.

What people forget is that when Trudeau's father ran for the Liberal leadership, he was a dark horse. Pierre's strengths were he knew who he was and he knew what he believed.

We'll have to see if Justin brings the same qualities to a Canada which is greatly changed since his father's time.

Absolutely true, Mound -- and the Liberal party is as guilty as the Conservative Party when it comes to living for the moment.

The Liberal record on the environment is a tale of neglect, pure and simple.

If Trudeau the Younger can shift the county's gaze to the horizon -- instead of its navel -- he will have done us all a favour.

We know our young people refuse to vote because, Canada is a cesspool of corruption. They are also concerned about pollution and global warming.

Justin will have to stay clear from, the Campbell/Clark BC Liberals. They work for Harper. BC young people despise the BC Liberals, as much as they do Harper. Young people have a web site called. shitharperdid.

Actually, most Canadians are fed up with Harper and want him gone. Those young people detesting Harper are who, Justin needs to appeal to. If Justin is upfront and keeps his word, the younger generation will support him.

Likely older people would support him too. Older Canadians are really fed up with the corruption, lies, deceit, dirty tactics and the dirty politics of the Harper government as well.

The polls suggest that a significant number of Canadians don't support Harper or his policies, Anon.

Justin's task will be to bring those people together.