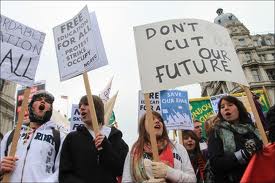 While the Harper government touts its record for job creation, it never mentions youth unemployment. That's because it focuses on its core constituency -- baby boomers, like me, who have retired. For the Harperites, the young don't matter. Indeed, they are a lost generation.

Carol Goar, in the Toronto Star, invites her readers to consider the facts:

• The International Labour Organization (ILO) projects no change in the job outlook for youth until 2016 at the earliest.
• Statistics Canada shows temporary and contract work is increasing at a faster pace among young workers than the rest of the population.
• According to Ottawa’s labour force survey, the youth unemployment rate has scarcely budged since the recession. It peaked at 15.2 per cent in 2009. It is 15.0 per cent now.
• The Canadian economy is undergoing profound structural change.
• Governments are cutting thousands of high-quality jobs in the public sector.
• And Ottawa is bringing in hundreds of thousands of temporary foreign workers to a plug holes in the labour force.


Previous studies in the United States and the UK have tracked the long term consequences of youth unemployment. In the UK:

Those who had experienced one bout of unemployment were still paying a wage penalty of 8 to 10 per cent two decades later. Those who had been out work several times were earning 12- to 15-per-cent less than their peers. Every layoff heightened the stigma they carried in the eyes of prospective employers.


Canada's present masters are intent on cutting costs. They have no desire to invest. And, by not investing in the young, they are impeding economic growth, even as they pat themselves on the back for their wise economic management.
Posted by Owen Gray at 7:34 am

Not only are our overlords ignoring the problem you describe here, Owen, but they are in fact compounding it by recruiting young people from Ireland to come work in Canada.

This inexplicable policy, apparently spearheaded by Jason Kenney, should outrage all of us: http://www.thestar.com/news/canada/article/1268099--canada-woos-irish-immigrants-in-search-of-jobs

It's all about driving down everyone's wages, Lorne. That was one of the items on the agenda when Mr. Flaherty met with the movers and shakers two summers ago.

It's not we, the people. And it's certainly not the young.

strike a tiny blow against the empire
sign this
http://www.greenparty.ca/stop-the-sellout
and read this
Opinion
Chairman Harper and the Chinese Sell-Out
Who needs democracy? Secret treaty is a massive giveaway of Canadian resources and rights with no vote in Parliament.
http://thetyee.ca/Opinion/2012/10/11/Chairman-Harper/

Thanks for the links, lungta. Nikiforuk was onto Harper a long time ago.

He understood how his evangelical Christianity informed his policy. And he understands why Harper insists on carrying out that policy in private.