Not Their Finest Hour 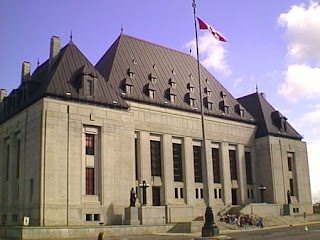 After the Supreme Court's historic ruling on Etobicoke Centre last week, some commentators applauded the decision as a reaffirmation of Canadians' right to vote. But Michael Harris points to the minority opinion, written by Chief Justice Beverley McLachlin, which takes issue with the quality of evidence upon which the majority based its decision:

First, the evidence is not relevant to the matter before this Court…after-the-fact information that a non-entitled voter was qualified is not relevant to whether he was entitled to receive a ballot on election day … Votes were set aside in this case because of failures in the registration and identification prerequisites of entitlement. These cannot be remedied by after-the-fact proofs of qualification…”

Chief Justice McLachlin’s logic is hard to argue – without the voter establishing his qualifications in an approved manner prior to voting, doesn’t the Act clearly state that he is not entitled to vote? It does. But her deadliest analysis was aimed at Elections Canada, the agency that came up with this dubious “fresh evidence” at the eleventh hour of the process.

“The reliability of the evidence is questionable. All that Elections Canada has done is attempt to discern names that are handwritten in the poll book, and type them into the NROE database [National Register of Electors] to find the closest match. Some of the names typed in are significantly different from their closest match, suggesting that the person in the NROE is not the person in the polling book. It is also entirely possible that handwritten names have been misread, or that two individuals have the same name…”


What was at issue in Etobicike Centre was the integreity of the elections process. It doesn't matter if a candidate wins by a landslide, if the people in charge of elections don't ensure that integrity. McLachlin argued that Elections Canada was responsible for the problem and a by-election was the best way to set the record straight.

As was the case in Bush v. Gore south of the border, this was not the Supreme Court's finest hour.
Posted by Owen Gray at 8:27 am

Canadians are only beginning to see, just how corrupt and disgusting the corruption in Canada is. However, no-one woke up fast enough. Once a country has Fascism, Communism or dictatorship ruled by a tyrant, it's nigh on impossible to get rid of them.

Harper had to stall the Etobicoke appeal, until he was able to install his new Conservative judges. The decision of the other judge, was to be over ruled. And, it was. Harper was scared to death, he would lose the majority, he cheated so hard to get.

Harper's method of cheating his way out of his dirt, was posted quite some time ago. Both posts ended with, this is a wait and see.

It's clear by now, Anon, that Harper's goal is to politicize the various non elected elements of government -- the civil service, the military, even the judiciary.

The only way to stop that juggernaut is to vote Harper out of office -- at the next opportunity.

As Kingsley, the former head of Elections Canada, has repeatedly said, even if one voter was denied their right to vote, a crime has been committed that should be prosecuted. Doesn't matter what the electoral results were.

Kingsley refused to be politicized, Bejiing. There are only a few people like him left in Ottawa. Kevin Page is one of them.

What a travesty. What a farce.

The system has no legitimacy.

In the Dred Scott case (1857), the United States Supreme Court ruled that all people, indeed, had the right to life, liberty and the pursuit of happiness.

However, Negroes were not people. They were "chattel" -- property.

An example of how the Supreme Court can be supremely wrong, thwap.