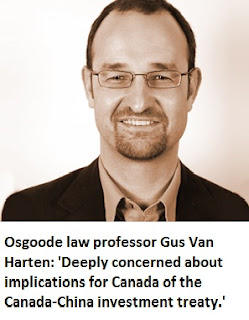 Lawrence Martin writes in The Globe and Mail that Canada will soon sign a trade agreement which the Harper government has kept completely under wraps. And unlike NAFTA -- which can be cancelled on six months' notice -- this deal can only be renegotiated after fifteen years. The deal may be good for Canada. The problem is we simply don't know if it's good or bad.

The government's secrecy, however, suggests that we're being flim-flammed. Gus Van Harten, of Osgoode Hall, believes he smells a rat:

One of the protestations is that national treatment clauses heavily favour Beijing. The Chinese have far more domestic barriers and restraints to trade than does Canada. Investors in China are required in many instances to use local suppliers and labour. Not so investors in Canada.

Another major sore point is the dispute settlement process. Unlike most other investment pacts, this one allows for settlements behind closed doors. As incredible as it sounds, Prof. Van Harten says, Chinese asset owners in Canada “will be able, at their option, to challenge Canadian legislative, executive or judicial decisions outside of the Canadian legal system and Canadian courts.


The first piece of legislation the Harper government passed was the "Accountability Act." It then ignored its own legislation. And, ever since, it has been operating behind closed doors. Socrates proclaimed that the unexamined life was not worth living. Surely, the unexamined treaty is not worth signing.
Posted by Owen Gray at 8:46 am

Email ThisBlogThis!Share to TwitterShare to FacebookShare to Pinterest
Labels: The Canada-China Trade Treaty

Thanks for this Owen. This is the biggest untold story to hit Canada in a generation and the media just ignores it. A future government will simply have to break the treaty because the consequences of this treaty means nothing short of the destruction of Canada as a sovereign entity.

It's truly remarkable how the media have left this story untouched, Kirby.

What we lack in this country is an effective opposition.

I have a little handout I made with a couple of the details that I have been handing around at the college I attend. I put links to petitions and articles in The Tyee, iPolitics and the Vancouver Observer, as well as a link to the agreement itself in it. I said in my text that any suits arising from loss of "expected profits" will come from taxes, which will cut badly into education, health and infrastructure budgets of the future. My fellow students are so far appalled. At least a few of them are more educated now.

That's being an effective opposition, karen.

The only thing that will stop these folks is loud and determined opponents -- like the folks who gathered outside the B.C. legislature yesterday.

Yesterday, I wrote to every elected official from Harper on down to my regional director.

Today, I sent an email out to my contacts list informing them of the implications, with email addresses of all of the people they need to write and cc...

This FIPPA amounts to Treason.

With Mr. Harper, Kim, everything and anything is for sale -- even his country.

from an email response concerning this bill
That is why the NDP is putting forward another motion at the House of Commons International Trade Committee to conduct a full study on this deal and, importantly, to call on the government to postpone ratification of this agreement until we have heard from a broad cross-section of witnesses.

We are asking for your help in making this happen. Please write the Conservative members of the International Trade committee and ask them to join the call for postponing ratification and support the motion to study the treaty.

NDP International Trade Critic Don Davies' motion will be debated on Thursday, October 25. To read his motion in full and to see other actions the NDP has taken on the FIPA issue, click here: http://www.dondavies.ca/canada-china-fipa/

WHAT CAN YOU DO?

Write to the Conservative MP's who are members of The Standing Committee on International Trade and urge them to support the motion:

Again, I appreciate this opportunity to update you on our efforts to ensure that all trade deals are done in the best interests of Canadians.

Thanks for the information, lungta. Let's hope readers of this blog will contact the people on the list.