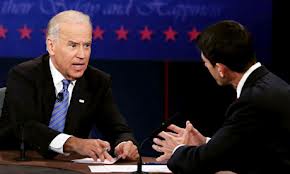 In his review of Thursday night's debate between Joe Biden and Paul Ryan, Hendrick Hertzberg -- in The New Yorker -- draws his readers' attention to the following exchange between the two candidates:

BIDEN: I love my friend here. I—I’m not allowed to show letters, but go on our Web site. He sent me two letters saying, “By the way, can you send me some stimulus money for companies here in the state of Wisconsin?” We sent millions of dollars. You know… [crosstalk]

MARTHA RADDATZ (moderator): You did ask for stimulus money, correct?
BIDEN: Sure he did. By the way…

BIDEN: I love that. I love that. This was such a bad program and he writes me a letter saying—writes the Department of Energy a letter saying, “The reason we need this stimulus, it will create growth and jobs.” His words. And now he’s sitting here looking at me. And by the way, that program, again, investigated. What the Congress said was it was a model. Less than four-tenths of one per cent waste or fraud in the program. And all this talk about cronyism. They investigated and investigated, did not find one single piece of evidence. I wish he would just tell—be a little more candid.


Mr. Ryan has declared that 30% of Americans are "takers." Granted, that number is considerably lower than Mitt Romney's 47%. But what the exchange reveals is that Ryan is quite willing to be a taker himself.

Romney campaigned as a "severe conservative" and now claims to be a moderate. Ryan, who slammed Obama's support for Green Energy, was quite willing to access  that support for his constituents.

Political hypocrisy is nothing new. But when Romney and Ryan repeat their claim that Barack Obama is a "failed leader," one has to ask,"Who are they?" It seems pretty clear that they are opportunists, who are -- in the words of that  Romney campaign strategist --  etcha-sketch politicians. They will say whatever it takes to get elected.

What Gertrude Stein said about Oakland, California, applies equally to the Republican ticket. There is no 'there' there.

This entry is cross posted at The Moderate Voice.
Posted by Owen Gray at 9:42 am

Email ThisBlogThis!Share to TwitterShare to FacebookShare to Pinterest
Labels: The Vice Presidential Debate

I fervently hope that "there" doesn't end up being the White House!

Good post Owen. Unfortunately, as I predicted in my blog a while ago, I still suspect that the Republicans will win. It is almost surreal watching the country disintegrate as a result of republican policies and Americans act as though the disease itself will cure the symptoms. Of course, quite a few African-Americans fought for the South in the Civil War, so what can one do?

There truly is a madness in the body-politic these days, Kirby. Citizens like to stand up for their rights.

Unfortunately, one of those rights is the right to be foolish. Writing in the first Gilded Age, Mark Twain knew the wages of such foolishness.