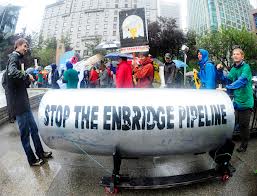 Yes, regulatory hearings before the National Energy Board will continue until the NEB approves the project. And yes, Enbridge will keep pushing for it. And yes, the Harper government, which is so publicly committed to the project, will continue to extol its virtues as part of the need to get Canadian resources to Asia.


But it will never happen:

To survive, the Gateway pipeline would have to push past the growing opposition of British Columbians in general, the opposition of the current Liberal provincial government and the NDP government likely to replace it next year, the unanimous opposition of environmentalists, considerable opposition from at least some of the aboriginal groups along the route and, if all this were not enough, the likelihood of prolonged court battles.


Despite Stephen Harper's ham handed attempt to remove all the obstacles, the people will have none of it. Perhaps the oil will flow down the Fraser Valley to Vancouver, where there will be opposition to loading it onto tankers at the port of Vancouver. Perhaps it will flow east to Sarnia. In both cases the pipelines have been built. But you can bet that, after the tainted meat scandal, Canadians will insist that those pipelines be maintained and not self regulated.

It's a reminder that the people of Canada can put an end to Stephen Harper's dreams. Now what about that dream of remaking Canada?
Posted by Owen Gray at 9:37 am

Email ThisBlogThis!Share to TwitterShare to FacebookShare to Pinterest
Labels: The Death Of Northern Gateway

I have said for a while now that the pipeline is dead. It is part of an interesting and growing tendency of Harper's efforts to destroy Canada to be cut short either by the courts or by the people. One wonders how far the people will go to save this country.

That is the ultimate question, Kirby. I suspect that the answer has something to do with how much contempt Canadians can take.

On Tuesday this past week, 250+ people turned out to hear economist Robyn Allan discuss the negative economic effects of the pipeline. For Prince George, that is a huge, huge turnout.

I'm a long way from B.C., Chris. But my impression is that folks there are absolutely opposed to the pipeline.

Any government which ignores them, does so at its own peril.