Radicals At The Gate 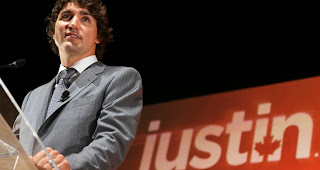 Just as Stephen Harper radically remade the Conservative Party, Michael den Tandt suggests that Justin Trudeau and his inner circle plan to rebuild the Liberal Party from the ground up:

Almost to a man and woman, the people closest to Justin Trudeau are “Greeks” (a cross between a Grit and a geek); bright, capable young people who, not many years ago, were toiling in relative anonymity at the feet of the party’s 1990s-era giants. Most are parents with young children. Like Trudeau himself, they tend in their backgrounds to hew to what is generally perceived as the party’s left wing. Some are people who’d hoped, in 2006, that Gerard Kennedy would win the leadership and revitalize the Liberal party. But they’re not talking about revitalizing any longer. They’re talking about starting over.


In 2006, Gerard Kennedy was met by indifference from the power brokers in the party's upper echelons. Their candidate was Michael Ignatieff. They failed to get their way the first time around. But they succeeded the second time; and Ignatieff -- who admitted that he was a better teacher than a politician -- quickly disappeared.

Now, almost decimated, the party's brass will not present much of a head wind to Justin's ambitions. And policy will come later:

There will be no leadership campaign policy booklet, such as the one produced by Michael Ignatieff in his 2006 leadership effort, Trudeau organizers say. Instead he will articulate his values and principles, sketching a frame within which later policy proposals will emerge. For now, the team’s main practical goal is to introduce him to people – as many as they possibly can, nationwide. “It’s less about the air war,” says [Trudeau adviser Katie]Telford. “He’s got to go out there and shake lots of hands and meet people and hear about the issues on the ground, and see how that evolves his message and his thinking.”


The Trudeau team is playing a long game -- which will be more about rebuilding a Liberal coalition, than just feeding the base. We'll have to see how that plan works out.
Posted by Owen Gray at 9:16 am

It seems so simple .. to stand up for principles, ethics, democracy.. and all those other old-school things.. like the electorate.

Politics today as espoused by Mr Harper reflect zero of those old school attributes. Preferring instead to play at dark prince of his own shallow obsessions, rather than stand for his own country. He has a brutish and witless echo chamber of accomplices and wannabe's in lockstep with his dreary and shrill pontifications and machinations.

Mr Mulcair will struggle to balance himself as the Anti-Harper, yet still stand for something fundamental and real. It shouldn't be hard in any way to define yourself as anti-Harper. Simply being honest, open, curious and seeking the same in your political associates, will get the job done.

Mr. Trudeau will struggle to find suitable bottomland suitable for political or principled ploughing.. He may be better advised to invent a new Canadian political party.. and invest in new 'branding'. The Liberal 'brand' is tarnished federally and under control of Mr Harper's conservatives in at least one province.. Ms Clark & Mr Boessenkool's abject failures aside. The Wild Roses seem a firewall farm team for Harper in case the Alberta Cons falter.. hedging your bets is logical to Harper.. essentially 'anything goes' in his view of governing.

Mr Harper created a 'ghola' zombie party.. simply by borrowing or stealing an old Conservative barn and 'brand' and existing MP's for his scary northern idiot party.. much as a hermit crab exchanges shells when a more useful one is found on the sea bottom.. or when an alien takes over a human body as effective 'cover'.

If Mulcair succeeds, he will be following Harper's script. Conservative nirvana is a two party state.

Trudeau will lead a children's crusade to replace an old and cynical elite. If he is successful, Stephen Harper will become the bitter old codger of Canadian politics.

One just seems to forget here that the NDP is full of real (not pretend party workers who are young)real young people who actually do reflect a cross of Canadians, and not just those born to money and privilege.

It appears the Liberal's game plan is to wipe out that knowledge and replace it with their version of faux middle class and hope Canadians don't notice.

Don't forget it was Liberals who lead the attack on the single mother who was young and lacked all that upbringing but authentically raised in the "middle class" and won in Quebec. Ruth Ellen Brosseau better known as Vegas took weeks of "trash talk" from the Liberals who believe only the privileged should be in parliament. https://www.google.ca/search?q=NDP+Vegas&ie=utf-8&oe=utf-8&aq=t&rls=org.mozilla:en-US:official&client=firefox-a

Funny thing is, Brusseau is extremely popular in her riding and the official opposition agri critic. http://openparliament.ca/politicians/ruth-ellen-brosseau/

As for Trudeau, I heard him join on the pile on and bash this Young sgl mom elected. His disdain and apparent sneer was apparent for all to see, at of all things, a youth empowerment talk. Hypocrisy knows no bounds when feels "entitled".

The Liberal rebirth is far from a sure bet, Jan. And, if the Liberals and the NDP descend into open warfare, Stephen Harper's position will be assured.

Whether in the NDP or the Liberals, the young will make the difference. If they fail to keep their eyes on the prize, the old guard will remain in charge.